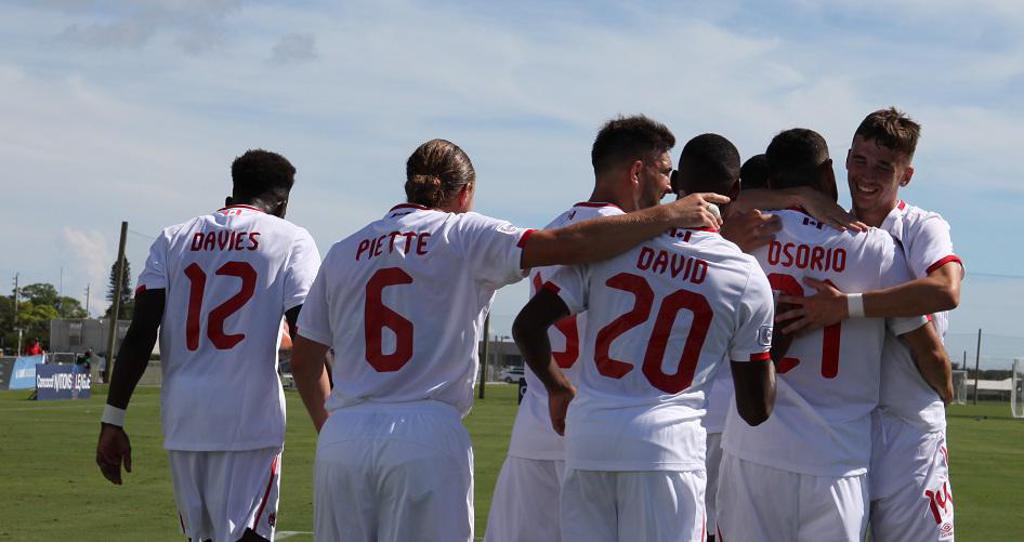 Canada Soccer’s Men’s National Team scored a record setting 8:0 victory in their first Concacaf Nations League match. The eight goals marked the most-ever in international competition for the Men’s National Team in a match that featured three teenagers in the starting XI for the first time in a senior competitive match. Canada now sits tied for first atop the Nations League table with three points.

“It was a resilient performance to go out and get the record eight goals which was important for us,” said Head Coach John Herdman. “We had a lot of chances and there were some quality goals through good build up. It was difficult for some players because they like to have room, but when you are playing in this heat and you have 10 players that are camped out within a 30-by-30 area, that's not easy.”

Jonathan David not only earned his first international appearance but also became the youngest-ever player to score in their debut before adding a second goal ahead of being subbed off in the second half. The two other teenagers were Alphonso Davies and Liam Millar.   20-year old CB Derek Cornelius also made his international debut.

“I am proud of the lads. You see Jonathan David in his debut‎, one of the youngest players for Canada, he stepped on the field and scored two goals,” Herdman said. “Then you have Lucas Cavallini and Cyle Larin banging goals in, it just shows you what this team has now.”

Jonathan Osorio opened the scoring in the 6th minute heading home a Liam Millar cross. Two minutes later Osorio put a shot off the bar but a streaking Lucas Cavallini headed home the rebound to make it 2:0.

Canada maintained near total possession throughout much of the first half with Junior Hoilett and Alphonso Davies combining on the left and Liam Millar and Jonathan David combining on the right. David found space and a Hoilett ball through gave the teenager his first goal in the 32nd minute, which he followed up five minutes later with his second. Cavallini’s second goal came off a calm turn in the box after Scott Arfield kept the ball in place at the goal line to give Canada a 5:0 halftime lead.

In the second half, Junior Hoilett found the back of the net on a pass from David in the 50th minute before Cavallini’s replacement Cyle Larin earned a brace of his own with goals in the 60th and 80th minutes for Canada’s record victory.

BACK HOME IN OCTOBER
Canadian fans will have a chance to cheer on their home side when Canada face Dominica in Toronto on 16 October in the second match of 2018-19 Concacaf Nations League Qualifying. Tickets to the match start as low as $20 (plus applicable fees) via Ticketmaster.ca or by phone at 1.855.985.5000. Group discounts are available by organising a group of 10 or more tickets, giving fans a discount of up to 30% off the regular price. There is also a special Me+3 ticket offer in Price Category 3 which gives fans four tickets for the price of three.