London's Jessie Fleming scored one in the losing effort 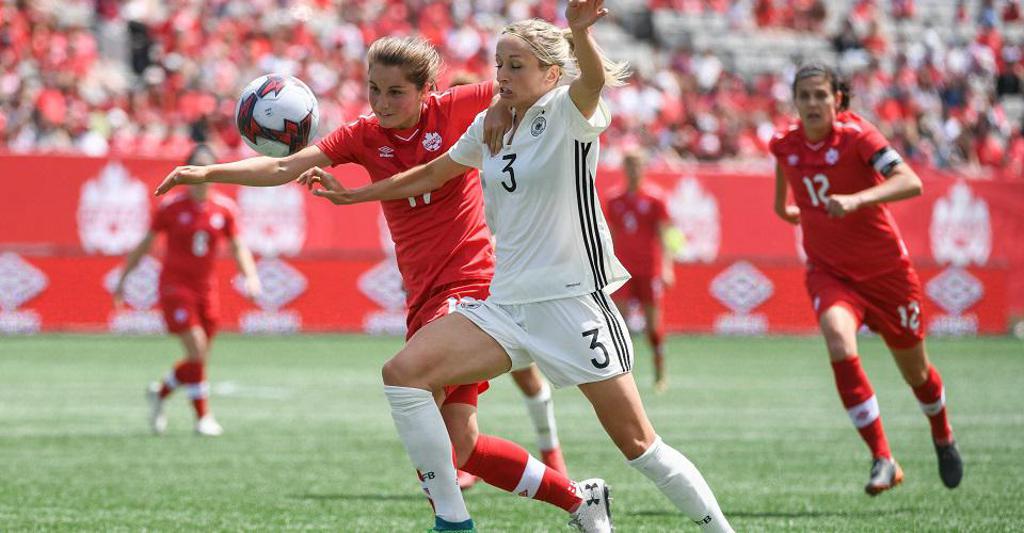 Canada opened its first home match of 2018 at Tim Hortons Field in Hamilton playing in a new formation, as it took on a young German side. Germany opened scoring in the first minute, capitalizing on a short clearance, but Canada worked its way into the experimental tactical plan throughout the first half creating several opportunities, while Canadian keeper Stephanie Labbe made a terrific save in the 24th minute to keep the score line low.

“This team worked really hard over the short period we had together here before the match, to play is this structure today, and I am definitely proud. The only think we asked of these players was to leave everything on the pitch and I think they did,” said Canada Soccer Women’s National Team Head Coach Kenneth Heiner-Møller. “The middle third of this match was one of the best performances I've seen while I have been the coach of this team, again within that new structure. If you think about resilience, this is one incredibly resilient team – coming back from one goal down so early, and leading Germany 2-1 during the match, that was amazing but we need to also finish the job.”

Christine Sinclair pulled Canada even in the 59th minute with a header over the keeper into an open net, scoring her 173rd international goal and coming one goal closer to tying Abby Wambach’s world record of 184. Jessie Fleming put Canada up 2-1 with a beautiful goal after Sinclair dummied the ball and let it pass to Fleming who was all alone on the spot. Germany’s pulled it even one minute after Canada's goal, quickly bringing the ball forward and shooting from outside the box, before scoring the winner in the 84th minute after its free kick hit the goal post and rebounded to a rushing player.

“We are obviously disappointed we lost and the way we started the game, but I think this is one of those games that we will be able to look back on and be proud of our performance and know we can build on it,” said Captain Christine Sinclair after the match. “We are in a good space as a team, if you look at the teams we have played this year they’ve all been top teams in the world and we have done pretty well. I think we are moving in the right direction and keep adding to our team, which is exciting. Tonight we took a new formation against one of the top teams in the world and to walk away with the performance we did, it adds another dimension to our team and we will be heading into the upcoming qualifiers confident.”

Canada will begin its FIFA Women’s World Cup qualifying campaign in October at the 2018 CONCACAF Women’s Championship while Germany continue their qualification run through the ongoing UEFA qualification which comprises two group stages and a play-off round.