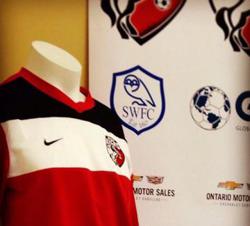 OSHAWA, ON- February 19, 2014. The Oshawa Kicks Soccer Club had its annual Open House at the Oshawa Civic Complex to announce a number of 2014 club partnerships.

The highlight of the evening was the formal announcement of a newly signed partnership with Sheffield Wednesday of the English Football League. An Oshawa sports club has not had a professional sports team partnership since the Boston Bruins and Oshawa General in 1967.

This exciting announcement with SWFC is another solid step in our journey to build on our foundation of excellence and to become a leader in the delivery of soccer programming in Canada, said Club Head Coach John Belzner. This partnership will help us fully deliver on our club mission by giving us strong player pathway and foundation on both the male and female side of the game, in addition to our already strong technical programming. SWFC is the perfect partner to help us fully realize our players potential in the long term.

As part of this new agreement the Sheffield Wednesday North American Academy will hold ID camps during the summer months in Oshawa which are open to any player, regardless of club or residency, to attend.

True excellence also requires community support as well. The Club has been very fortunate to receive the support of many in the community. The Kicks were proud to also announce two new major Oshawa based family oriented organizations as 2014 club partners.

Ontario Motor Sales has stepped up to be the clubs official House League Ball Sponsor for 2014 as well as the Under 7 House League Development Partner! We are very excited to welcome OMS to our recreational programming.

Oshawa Kicks have worked to insure that the fields used are maintained to an appropriate level. That maintenance requires tools like tractors, aerators, line painting machines and top soil spreaders. Ontario Motor Sales discovered our problem and stepped forward with a solution. This season our field maintenance team will be using a branded vehicle generously provided by OMS notes Club Business Manager Elizabeth McCaw.

For more than 4 decades the Italian Cultural Centre of Durham and the Oshawa Italian Recreation Club has been the model cultural club in Oshawa. Most well-known for their outstanding contribution to Fiesta Week, their contribution to vibrancy of our local community goes far deeper. So when The Oshawa Kicks Soccer Club was asked to help develop and expand the program offering, by bringing our expertise to develop a series of youth oriented activities we did so without hesitation. The Oshawa Italian Recreation Club has officially come on board as a 2014 club partner.

The Kicks also officially unveiled the new club logo and their new uniform supplier Nike. Members of the clubs house league, all star, competitive and adult league modeled the 2014 uniforms to give guest a sneak peak of its 2014 look.

Aside from the many club announcements made the event took a moment to recognize a club family who has been volunteering and supporting the club for over 20 years. The Likuski Family Volunteer Award of Excellence was presented and named in honour of the dedication and commitment the Likuski Family showed through their tireless efforts to support the club in its overall programming.

Club President Will Thurber reflected Of all the volunteers in the history of the Club few if any have the legacy of achievement of Liz and Howard Likuski. Everyone knows about the Frank Sobil Spring Classic Soccer Tournament as one of the largest tournaments in North America, but few know that it began 15 years ago with 6 teams“ scheduled by Liz Likuski – on her dining room table

About the Oshawa Kicks
Incorporated in 1975, the Oshawa Kicks Soccer Club has been providing quality soccer programming to our community residents. In the last 10 years the club has evolved into an Ontario Soccer Association (OSA) Gold Club Excellence award recipient providing development-focused recreational and competitive programming to over 3500 members aged 3-60+. Club programming highlights are an under 3 and 4 house league division, technical development program, 40 competitive boys/girls teams U8-18 and indoor/outdoor adult leagues. The Club pride itself in developing members to maximize their individual potential.