Canada will open the series at home on September 7 in Toronto before playing away on September 10 in George Town, Grand Cayman. 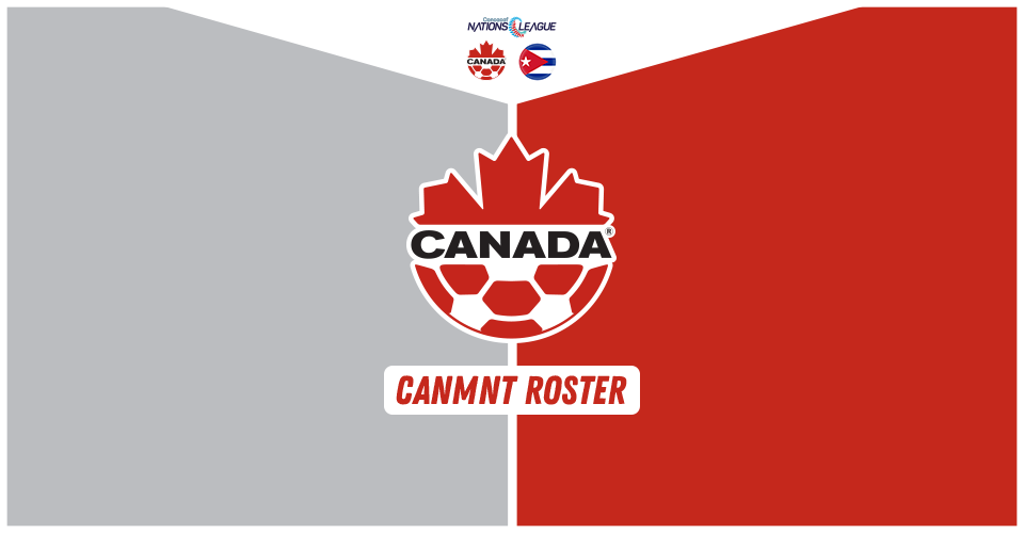 Canada Soccer have announced their player squad for an important two-match, home-and-away series in 2019-20 Concacaf Nations League against Caribbean rivals Cuba. Canada will open the series at home on Saturday 7 September in Toronto before playing away on Tuesday 10 September in George Town, Grand Cayman.

The Toronto match will provide Canadian fans the opportunity to welcome home their favourite players, notably a new generation of young players that has Canada scoring at an impressive rate. The opening Canada-Cuba match will kick off at 20.00 local at BMO Field in downtown Toronto, with fans encouraged to cheer on their red and white in a must-win match. Tickets are available via Ticketmaster.ca starting as low as $20. A special ‘Me+3’ ticket offer is available for this match. By purchasing three tickets in Price Category 2, fans will receive the fourth one free. Fans can visit canadasoccer.com/tickets for complete ticket information.

“It’s great to be back in Toronto because for many of these players it’s their hometown and an opportunity to show their best in the red shirt,” said John Herdman, Canada Soccer’s Men’s National Team Head Coach. “This squad of players are hungry for success and want to qualify for the Concacaf Nations League Final Four Tournament in June.  We’ve put down some strong roots over the last 18 months in our cultural and tactical approaches and we will be doing everything in this series of games to take our country to the next level."

The two September matches are part of a four-match series that will include a home match against USA on Tuesday 15 October and an away match against USA on Friday 15 November. From the three-nation group, only the winner will advance to League A’s final four playoff in June 2020.

Canada most recently faced Cuba at the 2019 Concacaf Gold Cup, with Canada reaching the Quarter-finals in back-to-back tournaments for the first time since 2009. Canada won their group finale in record-breaking fashion, with Lucas Cavallini and Jonathan David each scoring a hat trick in the 7:0 win over Cuba.

he dynamic duo, both part of the September squad for Concacaf Nations League against Cuba, have both tied the national record for Canada goals in a season. One more goal from either striker will set a new benchmark for Canada Soccer’s Men’s National Team. Both September matches will be broadcast live on OneSoccer.ca.

“This match will be different as we expect to face a tougher, more unified Cuban team than we did at the Concacaf Gold Cup,” said Herdman. “There’s a new technical leader and a new vision for the team, so our team will have to be ready for what they bring but at the same time we have to enjoy these moments of playing at home and focus on unleashing the talent we have in this squad.” 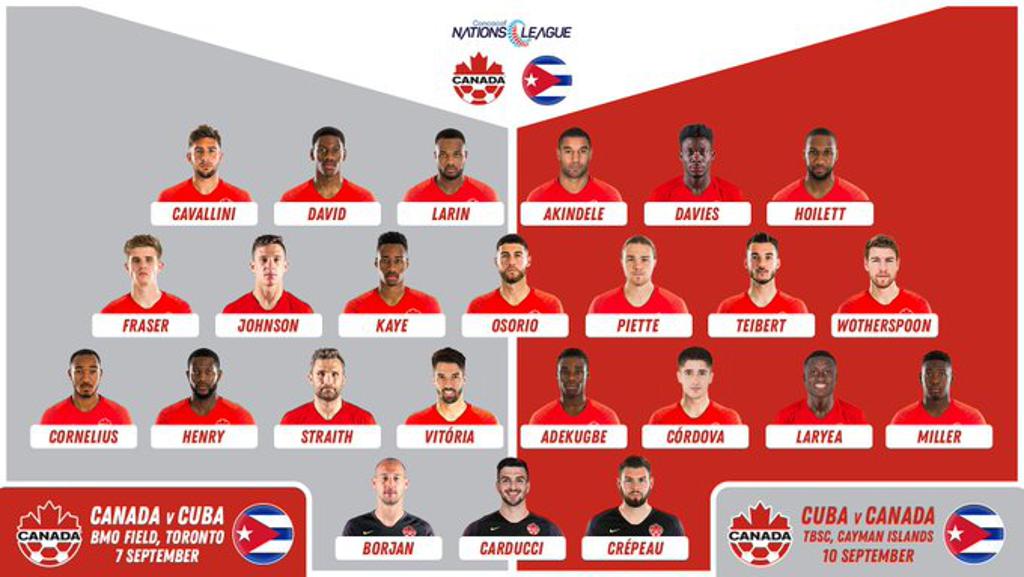 CANADA’S NEW GENERATION OF HEROES
Joining Cavallini and David on the attack for this camp are veterans Junior Hoilett and Tesho Akindele as well as youngsters Alphonso Davies and Cyle Larin. Cavallini and David have co-led Canada with seven goals each this year while David, Davies and Hoilett have co-led Canada with three assists each across five international matches.

Teenagers David and Davies are the two youngest players in the squad while Larin is one of 12 players aged 24 or younger. Akindele, meanwhile, is one of six players who earns his first Men’s National Team call up in 2019 along with midfielder David Wotherspoon, fullbacks Juan Córdova and Richie Laryea, centre back Steven Vitória, and goalkeeper Marco Carducci.

Supporting Canada’s back five, coach Herdman has also called in centre backs Derek Cornelius, Doneil Henry and Adam Straith as well as fullbacks Samuel Adekugbe and Kamal Miller. In goal, Canada has also called in Milan Borjan and Maxime Crépeau. Borjan is the most experienced player in the squad with 45 international appearances and he ranks tied for second all-time with 18 clean sheets (four behind record holder Pat Onstad).

While Borjan, Johnson, Piette and Straith have all made more than 40 international appearances, Carducci, Fraser and first-time call-up Laryea have all yet to make their Canada debuts. Crépeau, Miller, Vitória and Wotherspoon, meanwhile, are hoping to make their first home appearances on the international stage this Saturday 7 September in Toronto.

“The opportunity to play at home is always an honour and a privilege,” said Herdman. “Our boys have been dying for these moments, so we are excited to get back and start showing Canadians our quality.”

Canada Soccer’s Men’s National Team is unbeaten at BMO Field since 2011 with nine wins and five draws in 14 international matches. Just last year, Canada won 5:0 over Dominica in Concacaf Nations League Qualifying with goals scored by Cavallini, David, Hoilett and Larin (along with a Dominica own goal). All-time, other players with Canada goals at BMO Field are Akindele, Johnson and Osorio.

CONCACAF NATIONS LEAGUE
Through Concacaf Nations League, Canada will host USA in a competitive match in Canada for the first time since 1997. The two sides have since faced each other four times in the Concacaf Gold Cup including the 2007 semi-finals. In 2012 and 2013, the two sides played to 0:0 draws in each nation’s respective centennial match.

Tickets to the Canada-USA match are available via Ticketmaster.ca starting as low as $25. A special ‘Me+3’ ticket offer is available for this match. By purchasing three tickets in Price Category 2, fans will receive the fourth one free. Fans can visit canadasoccer.com/tickets for complete ticket information.