Under the Diversity, Equity & Inclusion initiative within the Govern area of Ontario Soccer’s Strategic Plan (2022-2026), Ontario Soccer is committed to making opportunities available for equity seeking groups and individuals through the game of soccer.

With funding from Canadian Tire Jumpstart Charities, the Coaches Association of Ontario (CAO), Ontario Basketball (OBA) and Ontario Soccer are excited to launch Jumpstart into Coaching, a new community coaching program for youth (aged 16-25) who self-identify as belonging to an equity-seeking community group.

We believe that every person should have equitable opportunity and access to participate and develop their skills in sport. The program will provide youth from underrepresented groups including, but not limited to – BIPOC, LGBTQ2SIA+, women and girls, low-income individuals, newcomers and persons with a disability - with essential skills such as teamwork, perseverance and leadership, as well as training to become a coach for their respective sport.

To achieve this, Ontario Soccer is working with the CAO to recruit and train new youth coaches from these communities as well as deliver targeted mentorship programs. Welcoming a new generation of coaches is an important investment in the future of sport in Canada, and will provide youth – regardless of social status, nationality or gender – with the opportunity to grow as leaders within their community.

Ontario Soccer has opened a registration process for those that are interested in participating in this program, online via this portal, until the closing date of September 2, 2022. The first one hundred (100) registrants, who meet the eligibility criteria, will receive a coupon code, valid until September 30, 2022, to access the NCCP’s Coach Initiation into Sport for free!

Together, we celebrate that there is an entire vibrant community of black Ontario players, coaches, match officials and administrators behind them, who have and continue to excel at all levels of our game from the grassroots to the world stage. 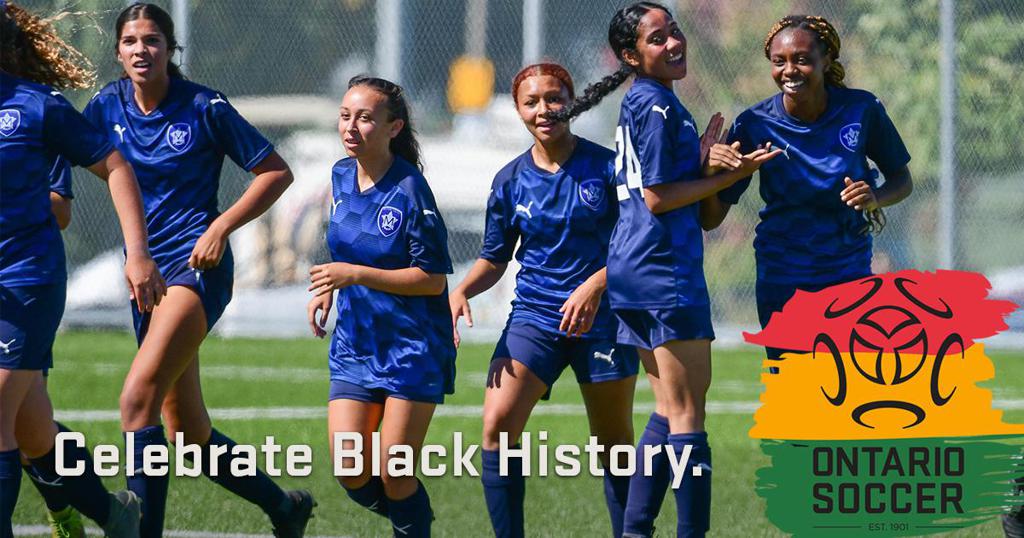 During Black History Month, Ontario Soccer continues to reinforce our decisive stance on diversity, equity, and inclusion within our game. As part of our continued efforts in this important area, we are proudly joining the Government of Canada and a rapidly growing community of organizations and individuals across the country in celebrating the many contributions and achievements Black Canadians have made.

Under the title “The Future is Now”, Black History Month gives our soccer family the chance to celebrate and acknowledge the transformative work that Black Canadians and their communities are doing now, which has been highly evident on the field of play and beyond.

Whether “Made-in-Ontario” female stars like Ashley Lawrence, Nichelle Prince or Jayde Riviere bringing home Olympic Gold for Canada in 2021, or their male counterparts like Atiba Hutchinson, Jonathan David or Tajon Buchanan vying for a spot at the FIFA World Cup Qatar 2022™,  Black Canadian athletes are capturing our country’s imagination like never before and are elevating our game to unprecedented heights.

Together, we celebrate that there is an entire vibrant community of black Ontario players, coaches, match officials and administrators behind them, who have and continue to excel at all levels of our game from the grassroots to the world stage. Many continue to add outstanding achievements of Black excellence to this growing legacy each and every day.

This Month, Ontario Soccer celebrates both these current achievements, while also proudly sharing stories from our community on Twitter, Facebook and Instagram. Without our Black teammates, friends, peers and colleagues there would be no beautiful game, as we know and love it today.

In addition, Ontario Soccer is renewing our pledge to our constituents, including our friends in the Black Community, to embrace inclusivity and diversity, while championing for vital change.

Ontario Soccer would like to thank Sandra Riberdy, Ontario Soccer’s Diversity Officer and the Anti-Racism Access and Equity Committee for their work in this area. Their leadership is helping to educate and inform us on the ways that we can build a better soccer community in Ontario.

It is important to take time to reflect today. You can learn more about the 'why' and how you can show your support by clicking this image

IMAGINE…waiting for your child to finally come home from residential school and they never show up because of who they are.

IMAGINE….the anguish in your heart waiting…wondering…worrying what happened to your child because of who they are.

IMAGINE…the stories you heard from children who were lucky to make it home but you can’t do anything about it because of who you are.

IMAGINE….not having your voice heard when you can’t find your child because of who you are.

IMAGINE….being beaten, berated, sexually abused, tormented, starved, dehumanized, murdered because of who you are.

IMAGINE….never seeing your family again because now you are dead, murdered…simply for being who you are.

IMAGINE…being tossed into an unmarked grave, forgotten, erased…eradicated because of who you are.

IMAGINE….30….40….50 years or more later your remains are found next to the school that stole your life because of who you are.

IMAGINE….finding many more graves of children who died horrific deaths because of who they are.

IMAGINE….finally going home where you belong with your people who know who you are.

IMAGINE….your identity is uncovered and your spirit being put to rest near your mom or dad who died waiting for you because of who they are.

IMAGINE…..the government and church responsible for your death can no longer hide or deny the inhumane treatment you received because of who you are.

IMAGINE….standing next to unmarked graves and demanding that justice be served for the senseless acts perpetrated upon innocent children because of who they are.

IMAGINE…..your government did this to your non-indigenous children and you never saw them again just for being who they are.

IMAGINE….you do the right thing and demand from your government that the 215 (and counting) graves be identified and returned back to their home for a proper burial because of who they are.

IMAGINE….identifying the remaining living perpetrators and prosecuting them accordingly because many of them are still alive and got away with murder because of who they are.

IMAGINE….that finally society looks at Indigenous people with greater understanding of who they are.

June Taylor is a Senior Advisor at the Ministry of Indigenous Affairs. She is Mik’maq and Anishinawbe from Sipekne'katik and Wikwemikong First Nations and a mother of 2 children and 2 grandchildren who were raised with strong cultural and spiritual beliefs. 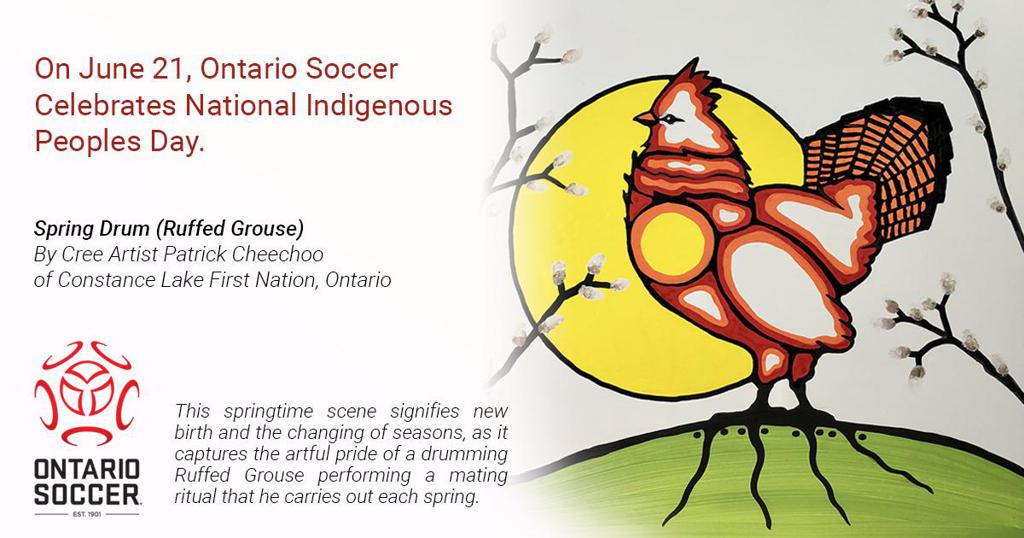 June 21, 2021 is the national 25th anniversary of National Indigenous Peoples Day, one that commemorates the heritage, diverse cultures, histories and achievements of First Nation, Inuit and Metis Peoples.

On National Indigenous Peoples Day all Canadians to recognize and celebrate the unique heritage, diverse cultures and outstanding contributions of First Nations, Inuit and Métis peoples. The Canadian Constitution recognizes these three groups as Aboriginal peoples, also known as Indigenous peoples. Although these groups share many similarities, they each have their own distinct heritage, language, cultural practices, and spiritual beliefs.

In cooperation with Indigenous organizations, the Government of Canada chose June 21, the summer solstice, for National Aboriginal Day, now known as National Indigenous Peoples Day. For generations, many Indigenous peoples and communities have celebrated their culture and heritage on or near this day due to the significance of the summer solstice as the longest day of the year.

In 1982, the National Indian Brotherhood (now the Assembly of First Nations) called for the creation of National Aboriginal Solidarity Day

In 1995, the Royal Commission on Aboriginal Peoples recommended the designation of a National First Peoples Day

On June 21, 2017, the Prime Minister issued a statement announcing the intention to rename this day National Indigenous Peoples Day.

Promotional and Social Media Materials for your use

Check back often for more resources that your organization can use.