The provincial governing body will put a renewed focus on key areas of development on and off the field, with a keen eye to improving under-serviced areas of the sport

Ontario Soccer is pleased to announce its, Board of Directors approved, new Strategic Plan for 2019-2021, which will serve as the road map for soccer in the province over the next three years.

The Strategic Plan will focus on four key areas of the sport and within those areas, each have three Strategic Initiatives where Ontario Soccer will look at tackling opportunities on and off the field.

Under Membership Engagement, Ontario Soccer will be putting a renewed focus on grassroots soccer and the ages of U-12 and below, while putting a promotional plan in place to leverage the celebration and launch of the new Canadian Premier League and the FIFA World Cup 2026. Ontario Soccer will also be looking to help develop emerging areas in its membership, such as the sport of futsal, the official FIFA indoor game.

“After extensive surveying within our membership, they have told us that they want to see resources put further into our grassroots game and we’ve made that one of our top priorities,” said Johnny Misley, Ontario Soccer’s Chief Executive Officer. “With the FIFA World Cup 2026 on the horizon and in our backyard, we have an opportunity with this runway to really make a difference by promoting all aspects of the game for our players of today and generations to come.”

Also, on the field, Ontario Soccer will be continuing to develop the robustness of its Participant Pathway.

Within the Pathway the three key areas of focus will be development and promotion of its talent pathway, which creates inroads into national environments for players, as well as developing coaches and match officials to bring the best out in their game. Within that, Ontario Soccer will also develop a formalized, long-term plan for the development of match officials in the province called Long Term Officials Development (LTOD). 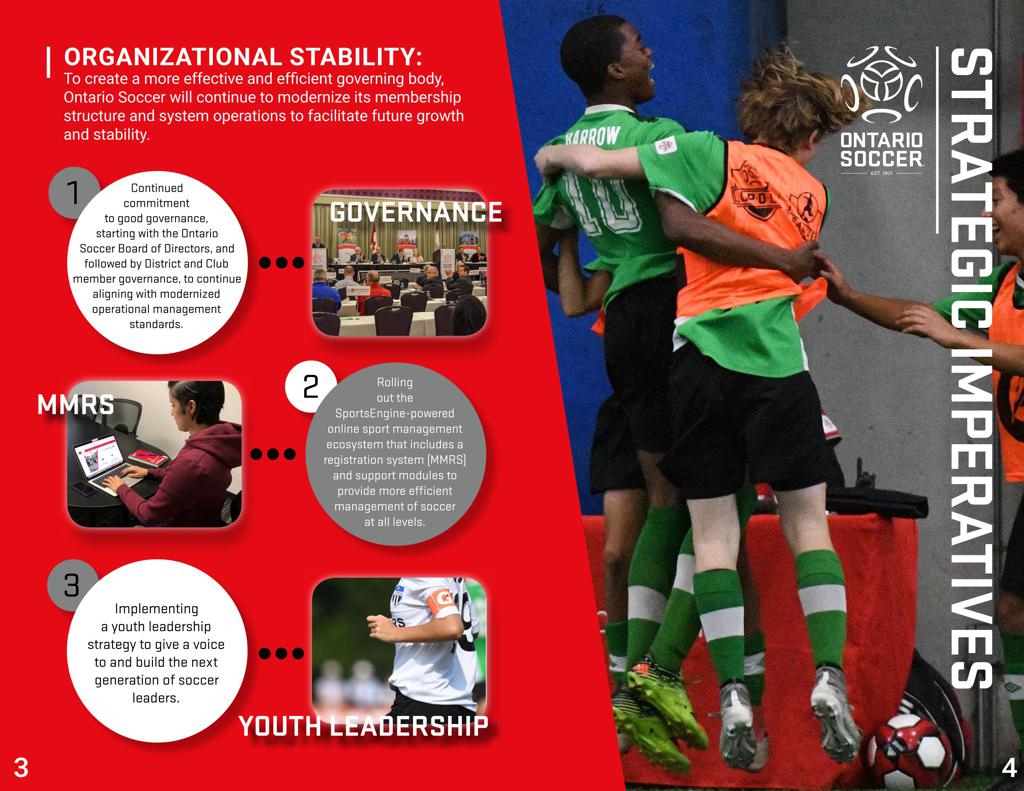 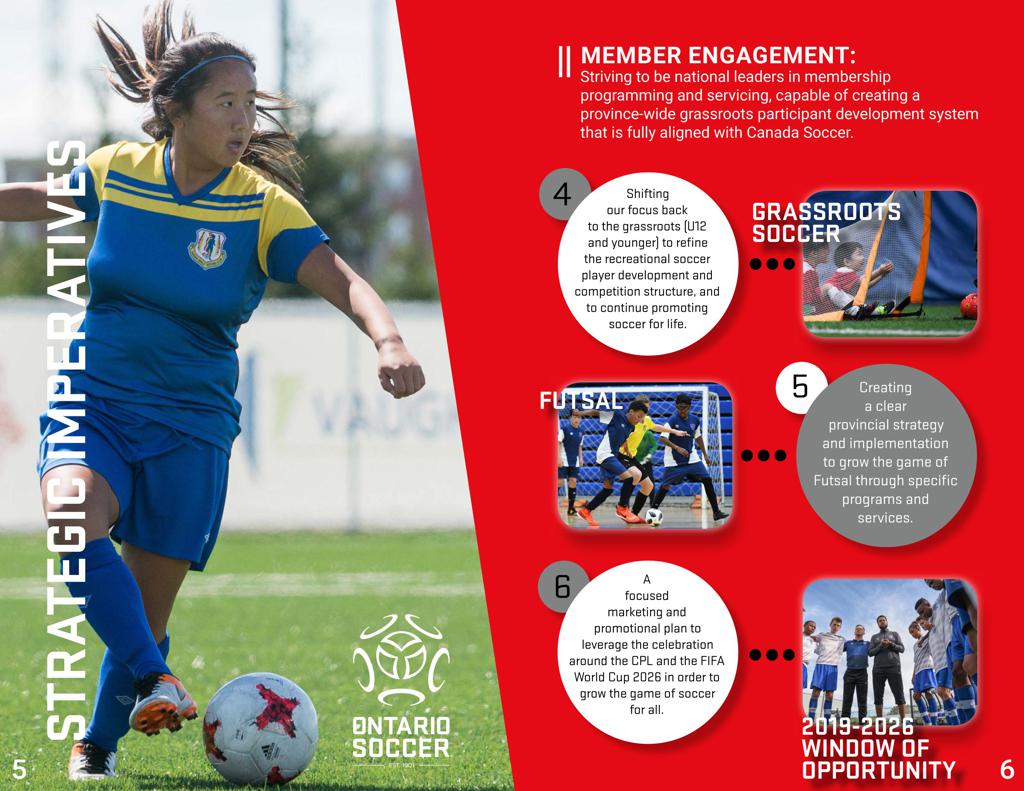 Finally, the provincial body will conduct a specialized assessment of Long Term Player Development in the Northern areas of the province and research what can be done to further assist and cater to their unique regional needs.

“It’s important that we are mindful of the vastness of our province and that one solution which works in one area, may not work in another. That’s why we will be taking this approach to supporting our Northern districts,” said Peter Augruso, President of the Board of Directors of Ontario Soccer. “Similarly, we need to work with our match officials, who are athletes in their own right, and develop a strategy to help them succeed with their own goals.”

Away from the field, the other two primary areas of development for the province will be putting a focus on Organizational Stability and the creation and retention of Partnerships within the game.

Ontario Soccer undertook its own governance modernization over the past strategic plan and will continue its commitment to good governance with the Districts and Clubs as part of ensuring the stability of the sport. As part of that stability, Ontario Soccer will roll out a SportsEngine powered online management tool to assist in the registration of all participants in game.

In addition to those efforts, a youth leadership strategy will be developed to give a voice to the next generation of soccer leaders in the province.

“We want to give our young leaders an opportunity to have a say in where the game, which they will inherit, is going,” said Augruso. ”To ensure the system, which they will eventually take over, is healthy, it’s important that we continue to make sure that our sound governance is practiced at all levels, including at our Clubs and Districts.” 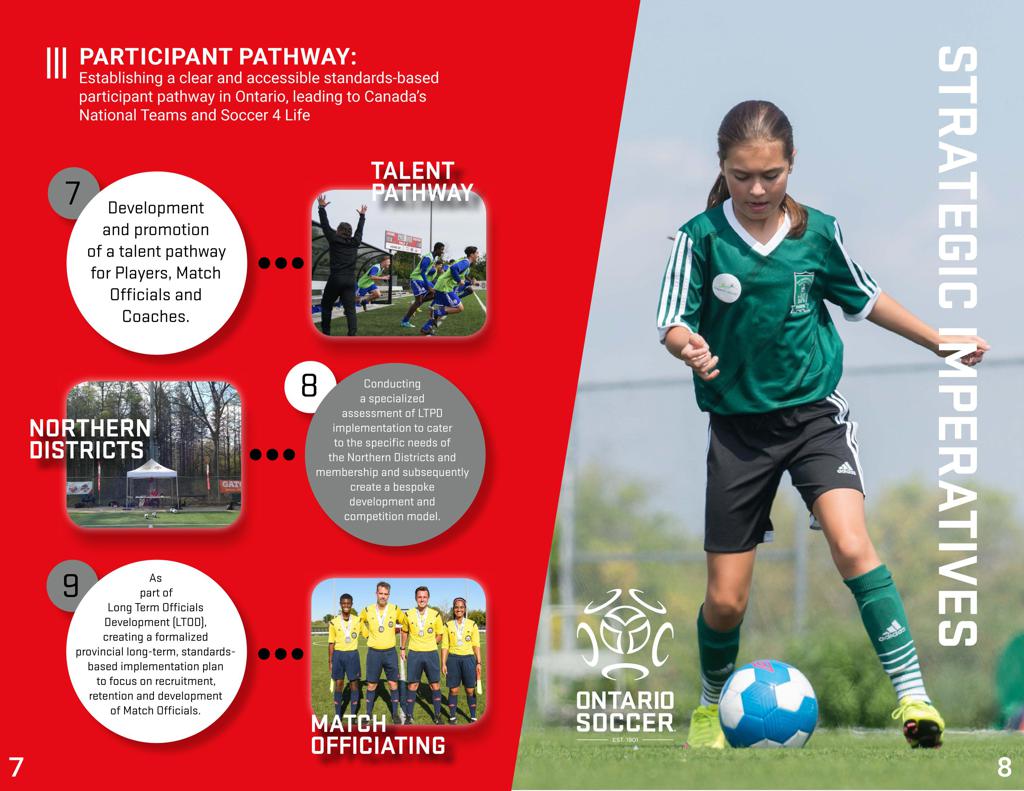 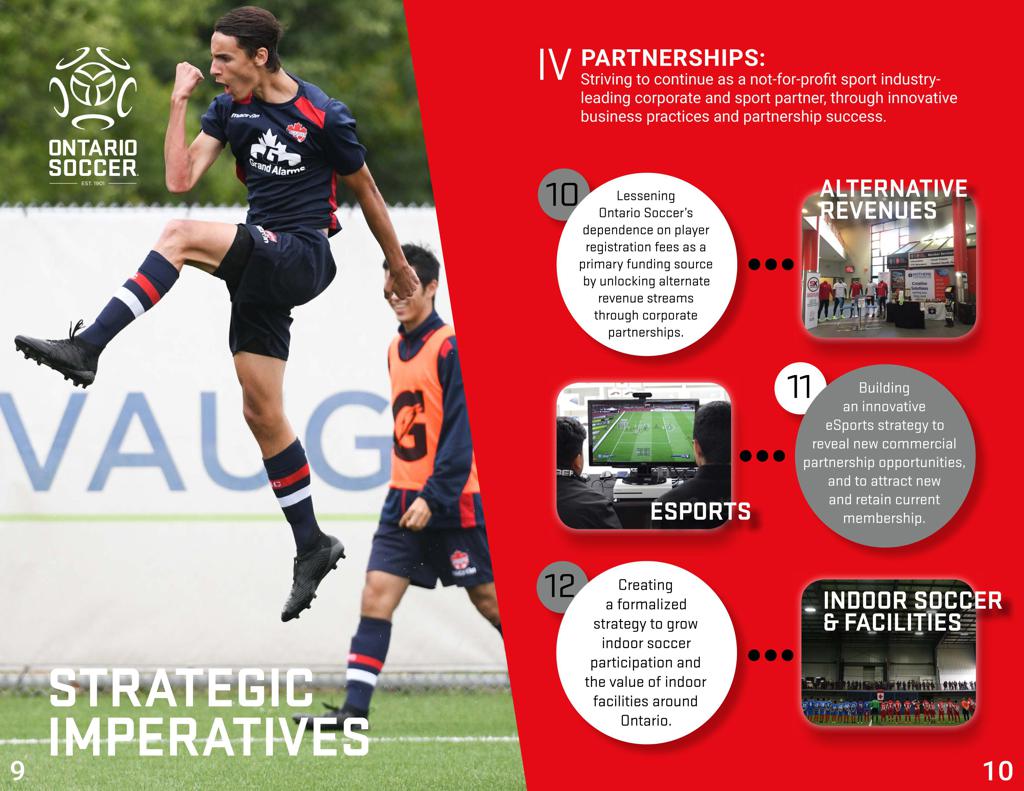 As part of that effort to lead in areas away from the field, Ontario Soccer will seek to unlock alternative revenue streams through corporate partnerships, to assist in lessening the dependence on participant registration fees.

As well, Ontario will build an innovative eSports strategy to tap into this fast emerging area where new commercial partnerships and new membership opportunities exist.

Finally, a formalized indoor soccer strategy for our cooler northern climate will be developed to help grow indoor soccer participation and to support the existing indoor facilities in the province and to provide and effort to find new infrastructure.

“The sport partnership landscape is as crowded as ever and to set us apart we need to look for new creative revenue opportunities to deliver in that space,” said Misley. “Similarly in how we’re responding to the changing landscape with our venture into eSports, we have to be cognizant of the unique challenges that living in Canada and Ontario brings us. Indoor soccer development presents both a challenge to our athletes and an opportunity for us as a province. We look forward to delivering in both those arenas.”

Visit OntarioSoccer.net/strategic-plan for more on what 2019-2021 will hold.