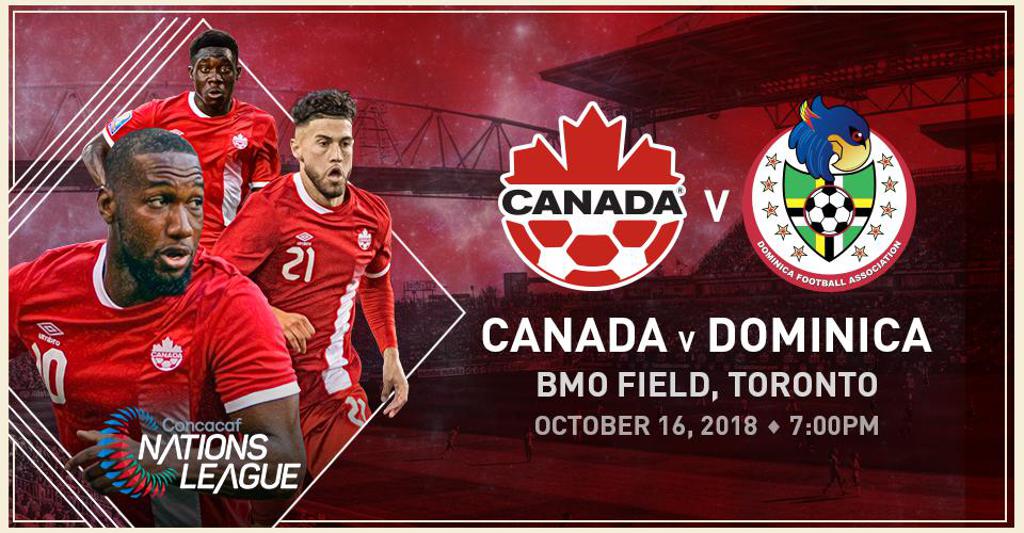 Canada will play their first home match in 2018-19 Concacaf Nations League Qualifying on Tuesday October 16 in Toronto at BMO Field. The new competition kicks off an exciting era for Canada Soccer’s Men’s National Team on the road to the 2022 FIFA World Cup Qatar™.

Canada will face Dominica in the October 16 home match with a 7 p.m. local kick off. Tickets will go on sale to the public on Wednesday July 25  at 10.00 ET / 07.00 PT via Ticketmaster.ca, with public ticket sales preceded by an exclusive advance window for Canada Soccer insiders on Tuesday July 24 . Groups of 10 or more are eligible for discounts of up to 30% off regularly priced tickets, and can submit their group order now, via the group ticket order form.

“We know that as a country, we can strive to be the best in Concacaf,” said John Herdman, Canada Soccer’s Men’s National Team Head Coach & Men’s EXCEL Program Director. “We know that these matches are going to be very important as they count towards Concacaf Nations League, Concacaf Gold Cup, and eventually FIFA World Cup Qualifiers. There is a real opportunity within this competition to enhance our skills within Concacaf so that we can build that resilience for when it really matters.”

The expanded 2019 Concacaf Gold Cup – up from 12 to 16 nations – will feature Costa Rica, Honduras, Mexico, Panama, Trinidad and Tobago, USA and those 10 nations from 2018-19 Concacaf Nations League Qualifying.

Canada will begin the 2018-19 Concacaf Nations League Qualifying series on 9 September away against U.S. Virgin Islands. Following the home match in October, Canada will then face St. Kitts & Nevis away on 18 November and then French Guiana at home on 26 March for their last match in this round.

“Speaking to some of our key players, they know how important the next four years are and they know that they have an opportunity to become game changers and heroes for this country,” said Herdman. “There is real clarity in the group and there is belief that we can take the game to a place it hasn't been in more than a quarter of a century.”

Ticket Information
Individual tickets to the Canada v Dominica match will go on sale to the public on Wednesday July 25 at 10am ET / 7am PT via Ticketmaster.ca and by phone at 1.855.985.5000. Tickets to the match start as low $20 (plus applicable fees) and fans will once again be able to take advantage of a ‘Me+3’ offer in select sections. The launch of ticket sales will be preceded by a 24-hour pre-sale for Canada Soccer Insiders. Groups of 10 or more will also be eligible to receive up to 30% off regularly priced tickets.

Complete ticket information can be found at CanadaSoccer.com/Tickets.