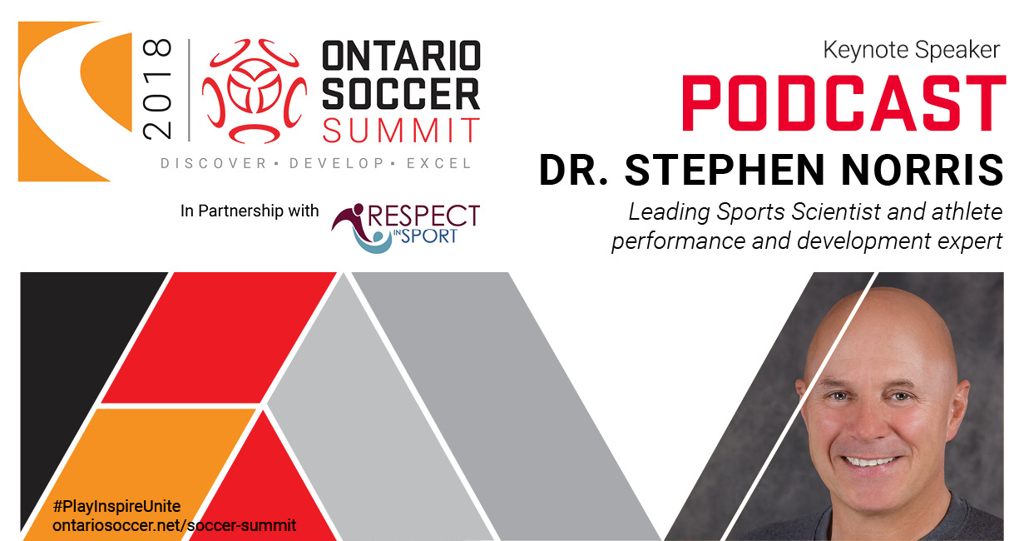 The Ontario Soccer Summit podcast is brought to you by Respect in Sport.

It's just six weeks out from the Ontario Soccer Summit 2018.

With the speaker roster set, ticket sales well underway and venue preparations ongoing, it’s now time to take a closer look at those who will be the main draws of the event.

Ontario Soccer continues to feature exclusive interviews with the three keynote speakers, which will take you behind-the-scenes and into the minds of three of the preeminent sport leaders in our country.

Each offers something unique to their area of expertise and will illuminate attendees on what to expect from the Ontario Soccer Summit on March 2-4 at Seneca College – Newnham Campus.

This week features a chat with Dr. Stephen Norris.

Dr. Norris was a previous keynote speaker at the Ontario Soccer Summit and his talk then, revered at the time and now the stuff of legend, is certainly a major reason why we have repeatedly heard calls to have him back.

For those that don’t know him, Norris served as the central performance consultant for the Own The Podium program leading up to the successful 2010 Olympic Winter Games in Vancouver, B.C. where Canada won a record 14 gold medals.

Dr. Norris is recognized for his work as a sport scientist, an advocate for grassroots holistic development of youth and a leading authority on playground to podium performing system development.

Today, he’ll speak about LTPD, competition and different age groups and remind us why soccer is in a unique position to impact the world.

How to purchase tickets

Listen to John Furlong as he discusses the power of sport, how it knocks down walls and soccer's unique ability to connect with every gender, ethnicity and cross barriers of ability.