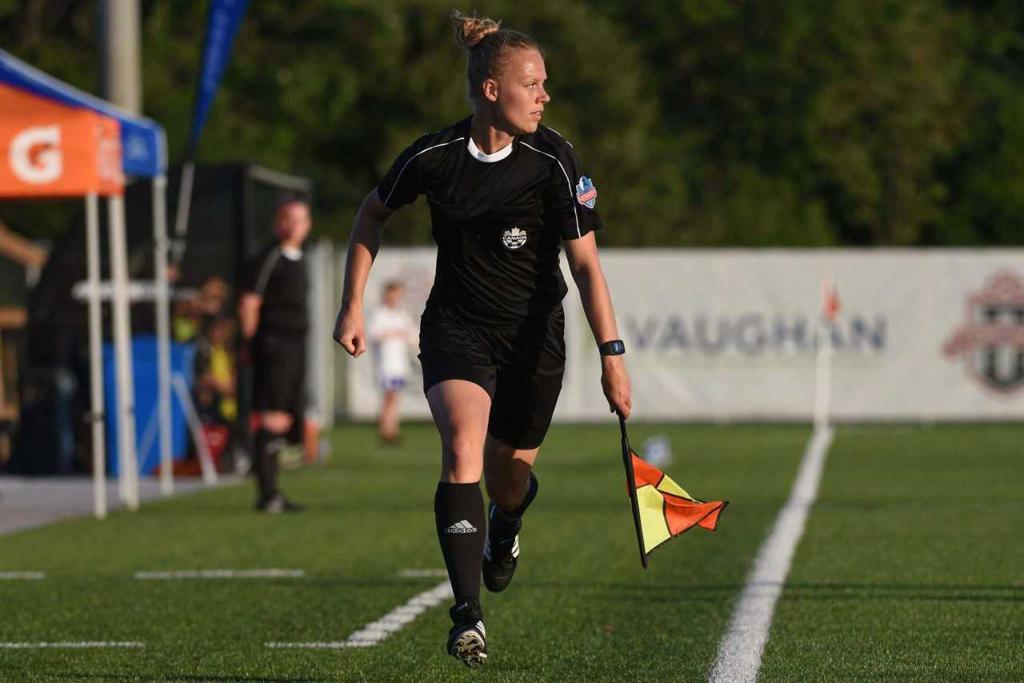 Canada Soccer recently announced that 17 of its match officials have been selected to the FIFA International Referee List.

Among the five new additions for 2018 was Oakville's Melissa Snedden.

Snedden shared her thoughts on her path to the FIFA list, the support she has received in her development and what advice she gives to young match officials.

You are now an Assistant Referee on the FIFA List. Can you sum up how you feel at this moment?

Excitement is the most predominant emotion that I’m feeling. I also feel a sense of accomplishment but know that the work doesn’t end here; it has just started. I’m excited for the next step in my career and looking forward to working at the International level.

The pathway to FIFA is often a difficult and demanding one, can you tell us how your pathway developed?

My career started at the tender age of 12, which at that point was exciting that I could help young kids learn the rules of soccer, and get paid. As time went on, it turned into a passion and it helped me develop numerous skills that aren’t taught in school. As a teenager I was having problems solving in a calm manner while dealing with irate coaches and parents from time to time. Those are the times when you ask yourself “is this really worth it?” As I wanted to develop more and more as a referee I encountered some setbacks, which impacted my development. There was a time where, because the setbacks outweighed the opportunities, I considered packing away my whistle and flags. Fortunately I was convinced otherwise and decided to give it another season. That next season was critical and I have to credit the numerous people that pushed me during that struggling time because it helped reignite the passion that I once felt. From that moment forward, I knew that encountering hardships was unfortunately part of my process but success would feel that much sweeter knowing that I had put in the work to hopefully achieve my end goal.

As I started to move from District to Regional to Provincial, I was able to be exposed within the province as well as at the National level, at Club Championships and CIS University National Championships. In October 2016 I was invited to Club National Championships in Vaughan, Ontario and at that time, I had no idea that ultimately that tournament would be the turning point in my career. After that tournament I was left with a big decision as to if I was willing and ready to take that next leap in my career. After many conversations with people on the Referee Committee at Canada Soccer, I decided that this was going to be my time. As I started to become more serious about my pathway, I knew I needed to work harder off the field, so my work on the field would be easier. During the winter, 5:30 a.m. at the gym a few times a week, was all too familiar. As much as I hated the early mornings, I knew that if I wanted to achieve the next level, I would have to work harder than those around me. In my free time I would often do Laws of the Game quizzes online, watch clips from International matches and bounce ideas about sanctions and restarts with some of my referee friends.

I knew that if I didn’t put in the work that I needed I would not be successful. 2017 was a whirlwind season for me as I attended three large tournaments. Canada Summer Games, U-15 Boys CONCACAF Championships in Florida and USport University National Championships in Winnipeg . Although the season was at times tiring and somewhat overwhelming I knew that if I stayed focused I would be closer to achieving my end goal. As I look back at this long journey, I am so thankful to have people that truly supported, challenged and pushed me when at times, I didn’t think it was possible. 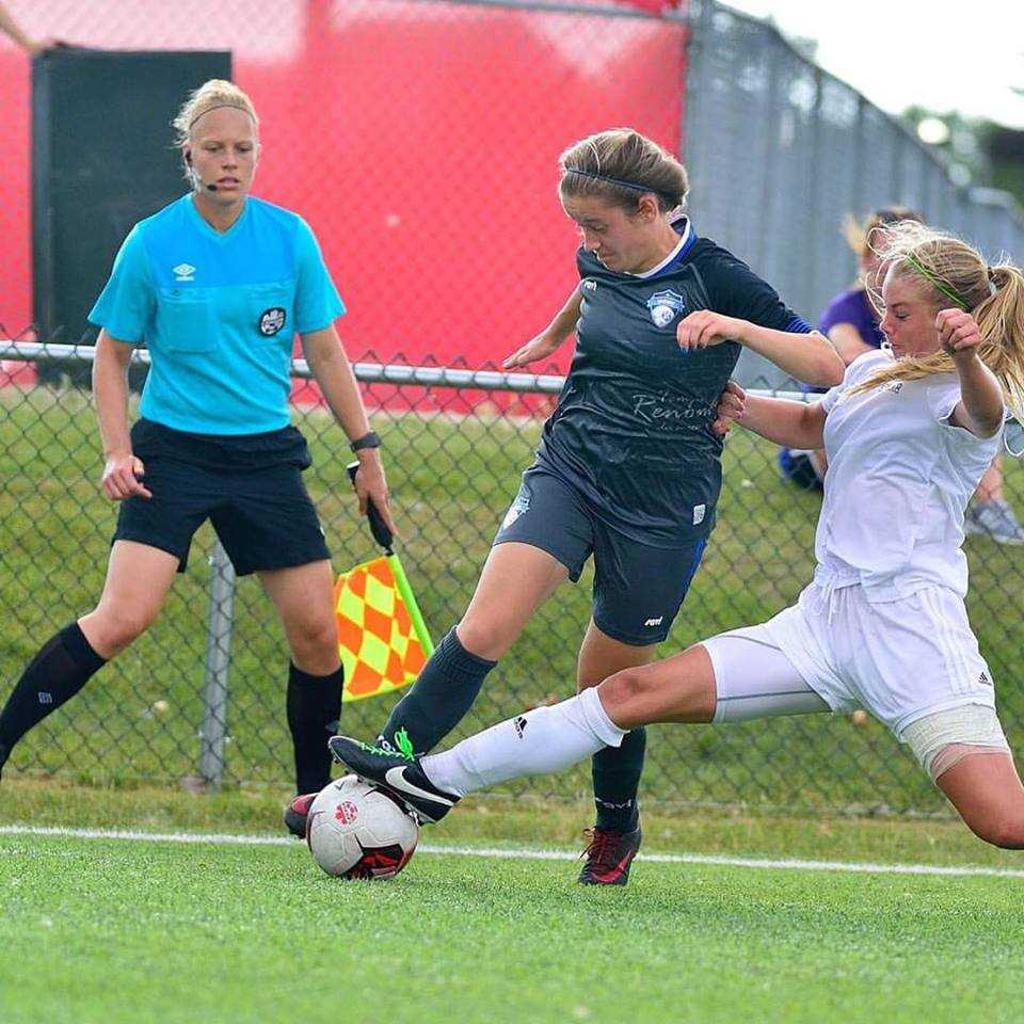 Many top officials have received support in their career, who did you receive the support from, and how important was it to you as you advanced?

Support starts at the grassroots and I’m very fortunate that even to this day, I have a great relationship with the Oakville Soccer Club. Starting as a mini referee and eventually taking the entry level course, I have been able to build and develop relationships with numerous people at the Club. As my career advanced, I was able to expand my network beyond the Oakville Soccer Club and into my District (Peel Halton). As more opportunities became available to me, suddenly I was travelling all over Ontario for games and tournaments during the week and on weekends. For me it was critical to build good relationships with my fellow referees as well as with assignors and assessors. I now recognize that it is not an easy job and can often be challenging. For my personal development I wouldn’t be at the International level without the support I received from the numerous assessors and assignors.

Having a good rapport with both Ontario Soccer and Canada Soccer has enabled me to build valuable relationships with talented people. I had the opportunity to attend CIS University National Championships for three years and meet and work with some of the Referee Committee members from Canada Soccer. Having the province support my decision to become an Assistant Referee was critical to taking my referee career to the next level and I’m thankful for that support.

My commitment to refereeing changed over the years and has had an impact on my life beyond refereeing. I would often miss holidays or family events as important tournaments or appointments would come up. I am very fortunate that I have an understanding family and group of friends that, although they may be frustrated with my absence during important times, they have always been extremely supportive. Some of my closest friendships have been established through refereeing and those people have been my sounding board through the good and bad times. They have been there through the tears and frustrations as well as the celebrations.

I am very thankful that over the years I have been able to maintain and create new friendships and relationships with within the referee world, from the grassroots to International level; which has really shown me that the learning never stops.

As a female now on the FIFA list, what advice would you give to younger female officials who are going to want to be just like you?

You have to want to advance for you and not for anyone else. People can give you numerous opportunities but if you’re not willing to make sacrifices and demonstrate that you’re committed, those opportunities will disappear. Commitment to the game doesn’t stop when the whistle is blown at the end of the game.

It continues in the classroom, with assessors/mentors before and after the game, at the gym/training sessions and most importantly within the Laws of the Game book. You need to be able to arrive to the game in the best shape physically, mentally and emotionally in order to do the job properly, no matter what level the game is. As I’ve been told numerous times, your performance off the field is just as important as it is on the field. At times being a female in a male dominated sport has it’s disadvantages but ultimately anything is possible, if you’re willing to work towards it.

In closing, is there anything else you would like to add?

Every referee’s pathway is unique to them and no two are alike. What I’ve learned over time is that no matter how many opportunities you may get, the most important thing is what you do with those opportunities. You have to want to develop and get better, as well as being open to receiving constructive criticism.

Everyone experiences games that they might not shine in, but those are the games that you learn from and work harder to make sure those mistakes don’t happen again.