Have you got your tickets to the Canadian Women's game on Sunday?

12 Ontario players called into the squad, will play in Toronto on June 11 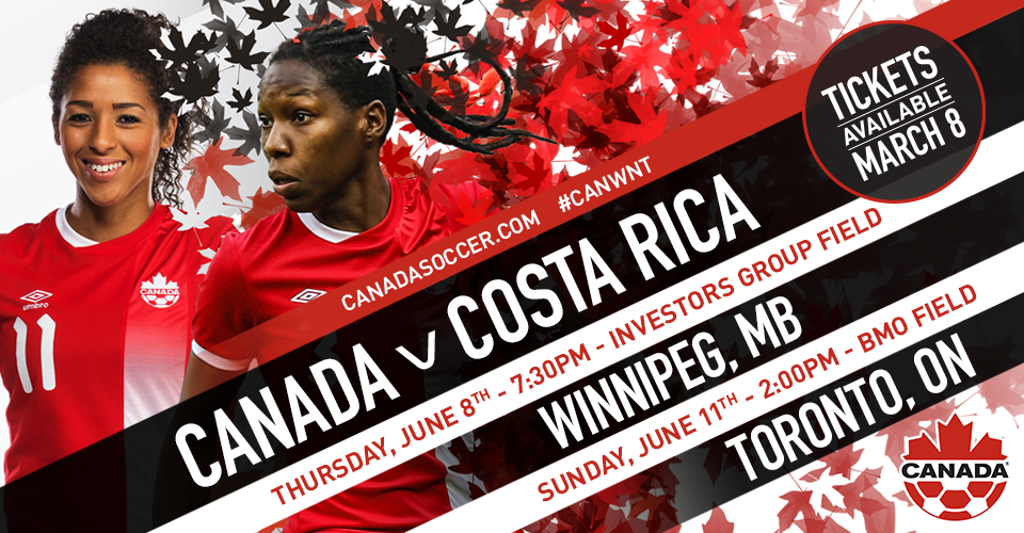 Canada Soccer has released the Women’s National Team roster ahead of two matches against Costa Rica on 8 June in Winnipeg and 11 June in Toronto. The June matches will mark the first meetings between Olympic Bronze Medalist Canada, ranked fifth in the world by FIFA, and upcoming CONCACAF rival Costa Rica since the CONCACAF Olympic Qualifying Tournament in February 2016, which secured Canada’s spot at the 2016 Rio Olympic Games.

Costa Rica is a team that has increased its competitive edge over the past few years, becoming a real threat in the CONCACAF region.   In the 2016 Olympic qualification match, remembered mostly for Christine Sinclair’s juggling highlight-reel goal from the top of the box, Costa Rica kept Canada at bay for most of the first half, defending deep and denying any effort to break through. Sinclair led the way with goals on either side of the break. Sinclair's brace was briefly cut in half by a Raquel Rodríguez penalty, but later complemented by a Deanne Rose insurance goal towards the end of the memorable 3:1 win.

"It’s great to be back in Canada and the players are really looking forward to this series against Costa Rica,” said Head Coach John Herdman.   “They have two world class players in Raquel Rodriguez (Sky Blue FC) and Shirley Cruz (Paris Saint Germain) and as a team they’ve been improving over the years.   It’s important that our team are continually exposed to CONCACAF opponents, who offer a very different challenge to what we’ve just experienced in Europe with Germany and Sweden.  With the critical upcoming 2018 CONCACAF Women's Championship, which is the FIFA Women’s World Cup 2019 qualification tournament, we will draw on this experience in our planning and preparation.”

Canada last played in Winnipeg in 2014 against the USA resulting in a 1:1 draw. Kadeisha Buchanan gave the raucous crowd something to cheer about as she opened the scoring in the first half before the Americans tied the game with fifteen minutes to go to draw 1:1.

Toronto fans last saw Canada in action against Brazil as part of the Road to Rio series in June 2016 as Canada prepared for the Rio 2016 Olympic Games. Canada fell to Brazil in that match 0:2 but came back and defeated them 1:0 in Ottawa three days later, and then 2:1 when it mattered most in the Bronze Medal Match of the Rio Olympic Games.

At the upcoming Toronto match, Canada Soccer will honour Women’s National Team players Josée Bélanger and Kaylyn Kyle, who announced their retirement from international play earlier this month.  Additional retirement announcements are expected prior to the 11 June home match, and fans will have the opportunity to celebrate these players in Toronto as well.

Canada Soccer's Women's National Team earned the honour of being the first Canadian team to win back-to-back Summer Olympic medals since 1908, and the first-ever women’s Canadian team to repeat on the Summer Olympic podium, when it captured bronze this past summer.  With an eye to continue as Canada’s most successful summer Olympic team, the team is now focusing on the upcoming FIFA Women’s World Cup 2019 and 2020 Tokyo Olympics.

Individual tickets to the Canada v Costa Rica matches are on sale via Ticketmaster.ca and by phone at 1.855.985.5000 (Buy Winnipeg | Buy Toronto). With tickets for Winnipeg starting at $25 and for Toronto at just $20 in (plus applicable fees), fans will also be able to take advantage of a special ‘Me+3’ offer in select sections for both matches, by purchasing three tickets in the eligible price category, fans will receive the fourth free. Groups of 10 or more are eligible to receive up to 30% off regularly priced tickets. Canadian Supporters have been allocated a few dedicated sections at both matches, fans wishing to sit in the Canadian supporter sections are encouraged to visit the Voyageurs website for more information and to purchase tickets through thevoyageurs.org.