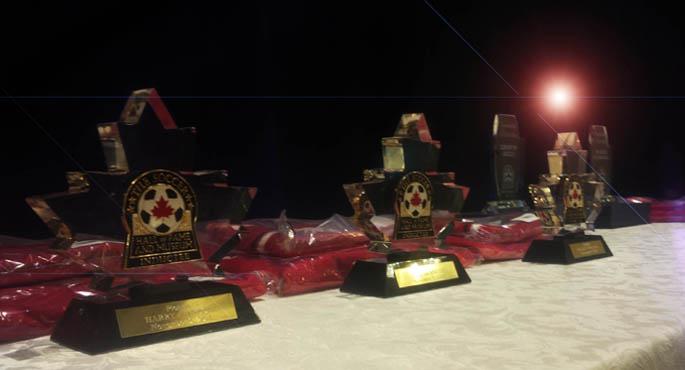 The Canadian Soccer Hall of Fame welcomed the 2014 Induction Class into the Hall in style on Sunday in a ceremony that included some of the biggest names in Canadian soccer.

Chris Rudge, guest speaker for the evening and the CEO of the Toronto Argonauts and former CEO of the Canadian Olympic Committee, gave a stirring speech, in which he challenged the soccer community to put away its infighting and focus on the real task at hand – developing world class soccer stars.

The Inductees, many of them stars in their own right, gave Rudge an extended standing ovation when he concluded.

The night was also highlighted by two performances by the family of Harry Manson – the first Aboriginal player to be inducted into the Soccer Hall of Fame – whose traditional dances celebrated not just Mason’s induction but the class as a whole. In the Pioneer category, the story of Harry Manson is one that few may know, but he had a tremendous impact on the First Nations in the late 1800s.

The most outstanding indigenous player of the time Manson, known as Xul-si-malt (One-who-leaves-his-mark), led his team from Nanaimo to the first B.C. provincial championship to ever be won by Indigenous players. And most notably of all, overcame the discrimination of Aboriginal players, which was common at the time.

The 2000 Men’s National Team, which captured the CONCACAF Gold Cup in one of the most notable achievements by a Canadian team to date, were part of this year’s induction class as the Team of Distinction. Canada danced its way through difficult competition including Mexico and in the final game of the tournament downed Colombia 2-0 and qualified for the FIFA Confederations Cup the following year.

Isabelle Morneau and Geri Donnelly, two Canadian women’s national team players, who found success at the highest levels of the game, were part of this year’s Induction Class in the Player category. Also named in the player category was Carmine Marcantonio who was a member of the famed Metros-Croatia team that won the NASL champions in 1976.

Being recognized as part of this year’s Induction Class were Builders Chris Bennett and Hector Vergara.

Organizations of Distinction that were recognized are the Edmonton Angels, who won the Jubilee Trophy an incredible nine times and The Robbie Tournament, which has helped produced national team players like Dwayne De Rosario, Diana Matheson and Jonelle Filigno.

Videos from the night will soon be made available on the OSA YouTube page.