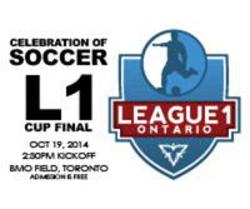 The Vaughan Azzurri, led by a Dena Lezady brace, topped Master's FA Saints by a score of 3-0 tonight in the final L1 Cup Round Robin match.

With the win, the L1 Cup Semi Final Matchups are now set.

The winners of those two fixtures will advance to the L1 Cup Final at BMO Field on October 19th.