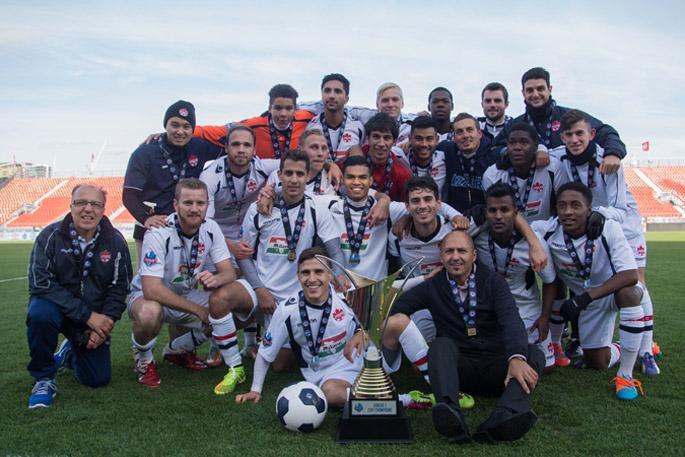 Both team started out with a strong focus on possession, keeping the ball on the floor and switching play out to the wings. Sigma used its fullbacks to great effect early on, while Vaughan focused its play through forward Dena Lezady.

Both teams had great chances to score early, but it was Sigma that found the back of the net first in the 7th minute through in-form forward Emery Welshman.

Following his goal against TFC Academy in the semi-final Welshman struck again, beating Vaughan on the counter attack before blasting the ball past Marques for a 1-0 lead. Going a goal down sparked Vaughan to press forward, staying on top of the Sigma defenders and forcing them into fouls and mistakes.

Vaughan came close to scoring on a few occasions, most notably in the 22nd minute through Joseph Di Chiara. The midfielder rooted Marques to the spot only for his shot to strike the post. The reminder of the half was even with chances for both teams. Coming out of the break, Vaughan’s move to bring on Andrew Ornoch and pair him with Lezady worked wonders.

The two were easy targets for midfielders to find, particularly in the wide positions or with their back to goal holding up play. Constantly applying pressure to Sigma’s back line, it finally paid off in the 61st minute through Lezady.

The big man collecting the ball and creating space for himself before putting the ball past Marques to draw the game level. Sigma pushed for an equalizer in the dying moments of the game, but it was Vaughan that controlled the remainder of the game.

Di Chiara capped off a strong season with a Man of the Match performance. His strong attacking play and goal were the difference on the day.