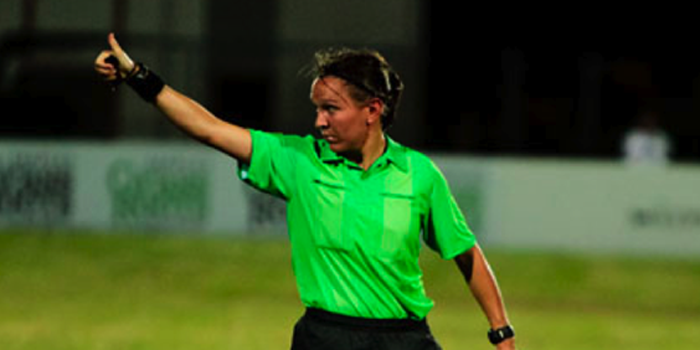 One Ontario official received recognition for her hard work from Canada Soccer at its Annual General Meeting.

Marie-Soleil Beaudoin was presented with the 2014 Ray Morgan Award, given to the referee whose performance at the national and international level is the most deserving of recognition for the year.

In her first assignment to a CONCACAF competition, she was appointed to the final at the 2013 CONCACAF Boys U-15 Championship.

She was completely taken aback by the honour.

“I was extremely surprised to get the Ray Morgan Award, especially so early in my career. It is very humbling to see my name next to very successful Canadian officials who have won it before me, such as Silviu Petrescu, Joe Fletcher, Carol Anne Chenard, and Hector Vergara, to name only a few,” Beaudoin said. “I will use this award as a great motivation to continue to represent Canada on the national and international stages as best as I can in the future.”

Beaudoin also spoke about what she would like to see for referees of the next generation.

“In the future, I would like to see more respect for officials, especially in the young age groups. I work as the Club Head Referee for Guelph Soccer, and, we unfortunately still see cases of referee abuse, most often from parents and coaches at the U9-U12 levels targeting teenage referees,” Beaudoin said. “Officiating is a great way to learn about oneself and grow as a human being, but it has to take place in a respectful environment, one where mistakes are used to learn and improve, not as a starting point for abuse.”

Those around Beaudoin speak very highly of her accomplishments and her character. Nicky Pearson, the OSA Manager of Referee Development, gave her a glowing endorsement.

“I can just tell you that she gives back so much to the young referee community. I have attended two of her education sessions the past month and she has the respect of all the referees in the area,” Pearson said. “She puts on a great season starting tournament every year that allows mentoring and assessing, and puts younger referees in with more experienced referees. She is always willing to be a guest speaker if her schedule allows. She is a pretty cool young lady.”