In the final game of the 2022 Gary Miller Charity Shield, Vaughan SC met North Mississauga in the Boys U17 division at the Ontario Soccer indoor field on Sunday afternoon.

True to this years tournament, the game was extremely exciting and the action got started early and often. There would be seven goals in the opening 26 minutes of the game.

Mississauga would come out the stronger team and strike with the opening goal in the fifth minute. Anthony Moreno would net the goal which came from a cross that was headed on by Mateo Caride, and likely destined to go in, but Moreno took no chances and tapped the ball home at the far post.

Mississauga would double their lead two minutes later thanks to a two on one break where Moreno repaid Caride by sliding  a pass through to for an easy tap in one-timer.

Vaughan would get back in the game in the 14th minute with an incredible three goals in the span of about three minutes.

Goal one would come on a corner kick to Daunte Tulloch at the back post, who finished with a nice header at a tight angle. Goal two would come seconds later on the ensuing kickoff through a long-range shot from Remi Agunbiade, who hit a screamer past the keeper from 25 yards out. Goal three would come three minutes later in the 17th through a measured cross to Federico Pellegrineschi who was unmarked at the back post and side footed home an easy goal.

Shell shocked after conceding three consecutive goals, Mississauga was able to regroup and tie the game up in the 25th minute. Caride would get his second goal on a header from a corner kick.

Mississauga then regained their lead a few seconds later in the 26th minute when Adonis Botsinis took advantage of a mistake in the back when a clearance was miss-kicked and fell straight to him, allowing him to slot home an easy goal from just outside the six yard box.

The second half was more tamed as both coaches likely delivered messages centred on defence. Both teams threatened, but the half was void of any clear scoring chances and the 26th minute 4-3 scoreline would stand until the end.

With the game’s conclusion, the 2022 Gary Miller Charity Shield come to an end. Ontario Soccer is grateful to everyone who supported in various ways and was able to raise over $12,000 for charities. 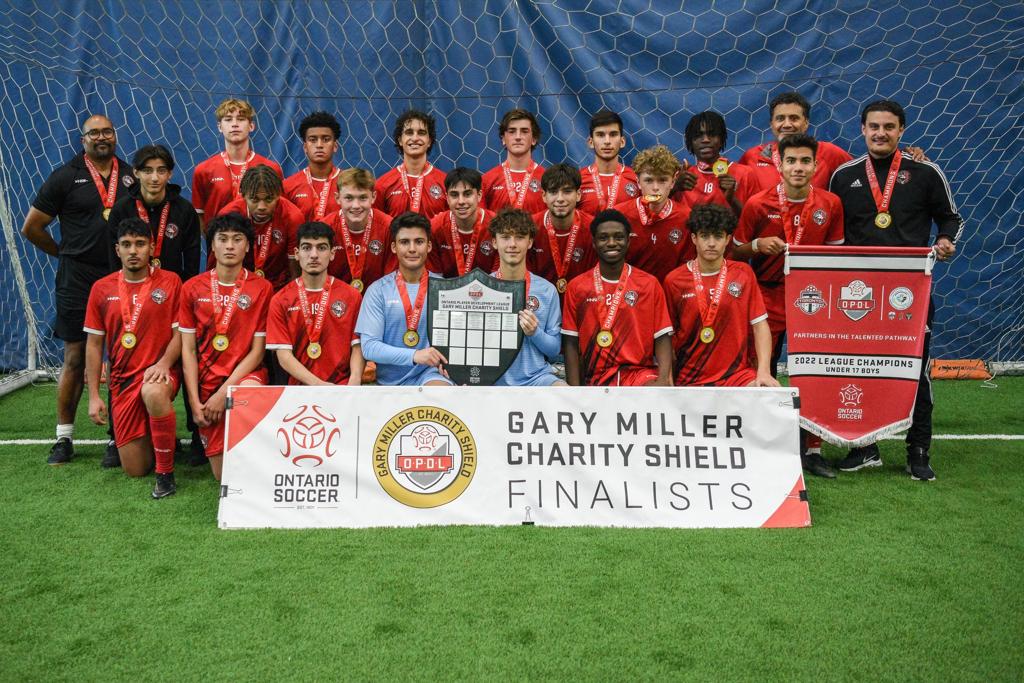