Picking up where yesterday left off, it was yet another highly exciting match in the 2022 Gary Miller Charity Shield Finals on Sunday morning, where Vaughan SC met Woodbridge SC in the Boys U14 division.

Also like yesterday, the action got off to a blistering start.

Off the opening kickoff, Vaughan took only a few passes to work a break away through ball to Hazem Elmarakby who calmly finished to put Vaughan up 1-0 within 30 seconds.

Woodridge almost replied in the tenth minute off a Leandro Stalteri free kick from just outside the top of the box. Stalteri’s shot seemed destined to go into the bottom right corner, but Vaughan goalkeeper Vicenzo Giuliani Mirabal made a great diving stop to preserve Vaughan’s lead.

Woodbridge came even closer in the 15th minute when Noah Girimonte dribbled through a few players in the box and fired a blast that went off the crossbar and out.

The next best chance fell to Vaughan in the 29th minute through Anthony Umanzor who hit a screamer from 30 yards out that swerved and dipped, but not quite far enough as it hit the crossbar and stayed out.

Woodbridge came close to an equalizer again in the 35th minute from a free kick. From the cross, the ball fell to Alessandro Bruni who hit a strike that somehow made it through a crowd of bodies and would have went into the bottom right corner if not for an incredible diving stop from Mirabal who needed a full stretch effort to make the save.

The high intensive action continued in the second half.

Once again, Vaughan got off to a fast start in the second half and this time, it took them only 90 seconds to score. The goal came from Ignacio Sabbatasso who was able to find some space on a corner kick and deliver an accurate header to put Vaughan up 2-0.

Despite their lead, Vaughan continued to push forward and in the 63rd minute a cross delivered into the box hit a Woodbridge hand and the penalty was awarded by Match Official Daniel Jacob. Vaughan’s Aylon Yshaia would dispatch the kick and remove his shirt for the celebration as Vaughan took a commanding 3-0 lead into the final stages of the match. Yshaia would be awarded a Yellow for the celebration.

Woodbridge would net a consolation goal in extra time, but ultimately fall to Vaughan who capture the 2022 Boys U14 Gary Miller Charity Shield. 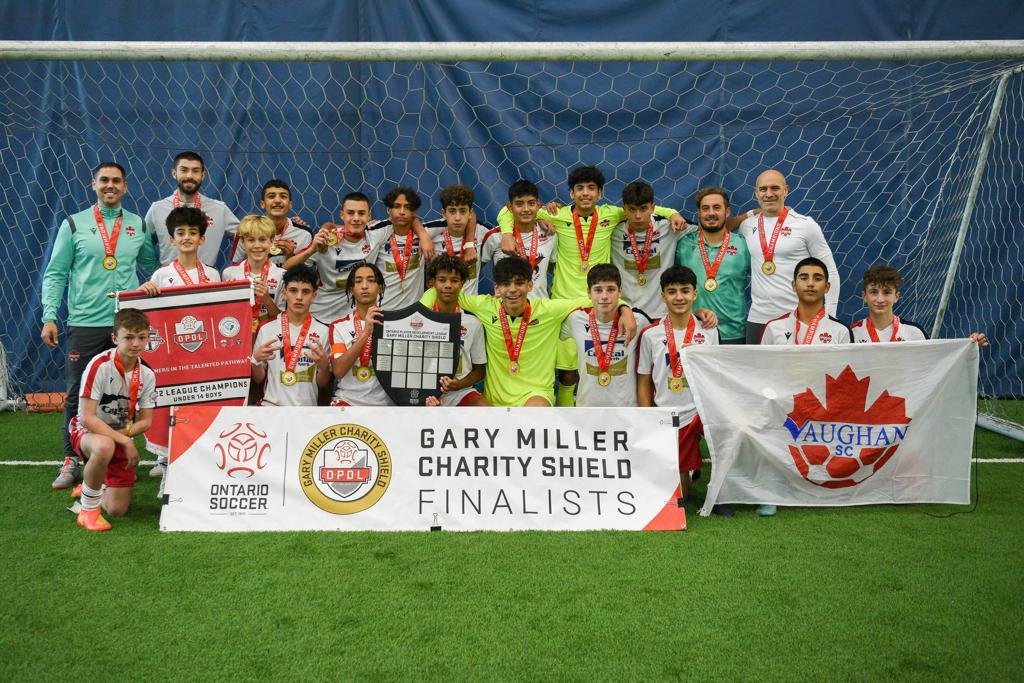