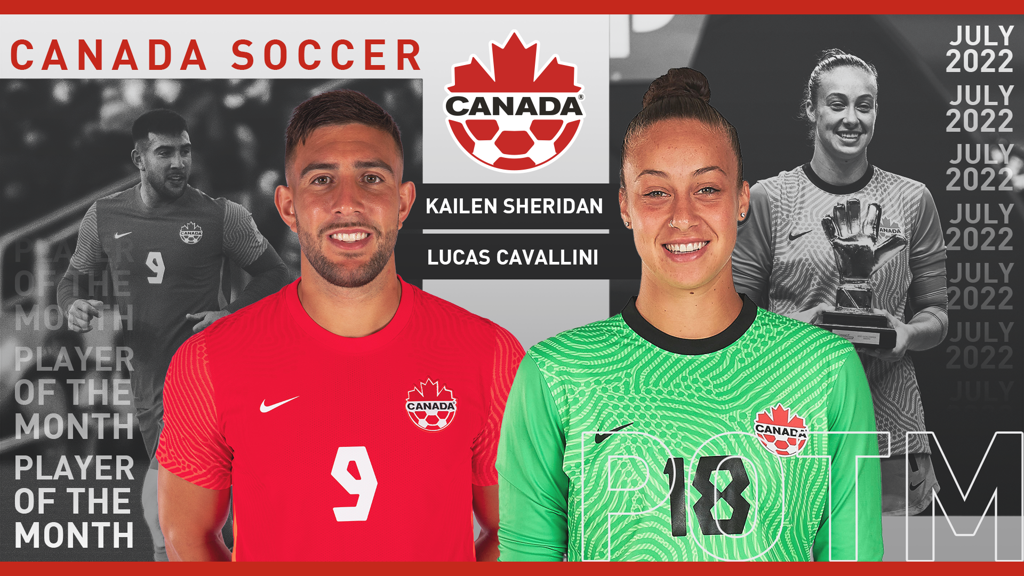 Lucas Cavallini and Kailen Sheridan were named Canada Soccer’s Players of the Month for July 2022. Forward Cavallini helped Vancouver Whitecaps FC win the 2022 Canadian Championship to qualify for Concacaf Nations League while goalkeeper Sheridan won the Top Goalkeeper Award at the 2022 Concacaf W Championship to help Canada qualify for the FIFA Women’s World Cup Australia & New Zealand 2023™. Sheridan along with Jessie Fleming, Vanessa Gilles and Julia Grosso were all named to the Best XI as Canada finished second at the Concacaf Women’s Championship.

Sheridan from Whitby, Ontario posted four consecutive clean sheets for Canada in July at the Concacaf W Championship. She then earned Performance of the Match honours in the Final, a 1:0 loss to the USA who scored the Championship winner on a penalty in the 78th minute. Sheridan made a handful of saves in the Final, the best from the goal line toward the end of the first half to keep Canada in the match.

After the Concacaf W Championship, Sheridan posted another clean sheet in club colours, this time a 1:0 win as San Diego Wave FC held first place in the National Women’s Soccer League (NWSL). Sheridan, the all-time Canadian leader in NWSL clean sheets, stopped a penalty attempt in the away win.

Canada Soccer’s Women’s National Team finished in second place at the 2022 Concacaf W Championship after they were defeated 1:0 in the Concacaf Final in Guadalupe, NL, Mexico. Already qualified for the FIFA Women’s World Cup Australia & New Zealand 2023™, Canada will now advance to an Olympic playoff series against Jamaica in September 2023 in order to qualify for the Paris 2024 Olympic Games.

Cavallini from Mississauga, Ontario helped Vancouver Whitecaps FC win the 2022 Canadian Championship at home. With 24,307 fans in attendance at BC Place, Whitecaps FC won 5-3 on kicks after a 1:1 draw with Toronto FC. In Major League Soccer action, Cavallini scored two goals in five matches as the Whitecaps moved to within four points from a playoff spot.