Ontario Soccer announced today a milestone partnership that will see professional soccer in Ontario uniting to support the promotion and development of the game in the province.  Expanding on its existing relationship with two of the foremost leaders of the professional game in Canada, both Major League Soccer Pro-Club Toronto FC (TFC) and the Canadian Premier League (CPL), on behalf of its Ontario-based member Clubs: Forge FC, York United FC and Atlético Ottawa, are now Premier Partners of Ontario Soccer.

TFC and CPL will also become the co-presenting partners of the Ontario Player Development League (OPDL), which will officially enter its eighth season this weekend, as games kick-off in venues across the Province on May 7th, 2022. The OPDL, owned and operated by Ontario Soccer, is the province’s premier youth high performance program and the foundation of Ontario Soccer’s Talented Pathway.

The OPDL was created to provide opportunities for the top players, coaches and match officials in the province to develop and advance to higher levels of the game. Since its inception in 2014, the OPDL has grown to encompass 29 License Holder Clubs from Ottawa in the East to Windsor in the West, and is currently developing 3,000+ male and female athletes from U13 to U17.

Both TFC and CPL are vital aspirational destinations along the Talented Pathway: 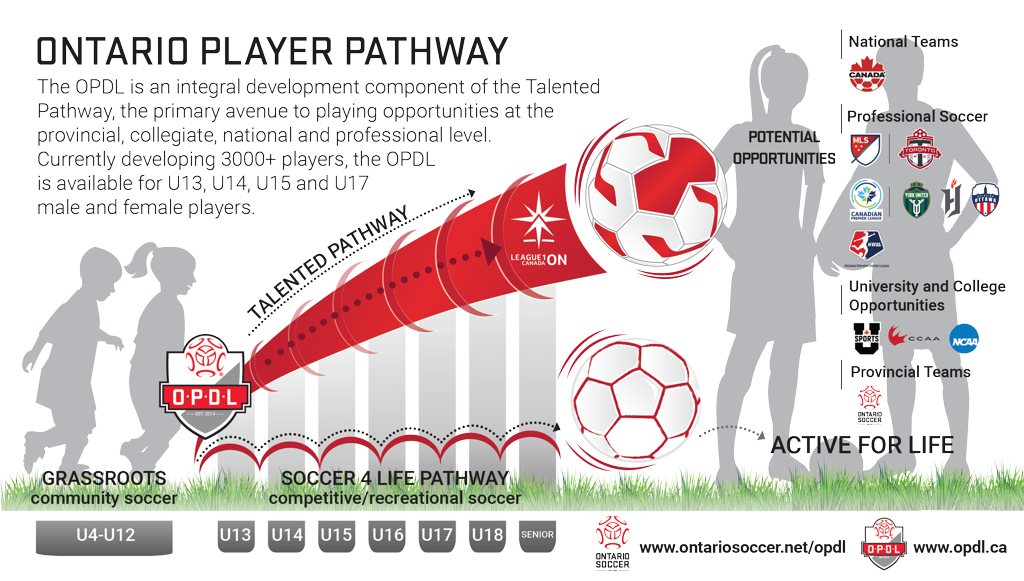 “Through their commercial investment in soccer both TFC and CPL are showing tremendous leadership to continue to rebuild our sport in Ontario,” said Ontario Soccer Chief Executive Officer, Johnny Misley. “This partnership has been a vision of Ontario Soccer for a long time and will play a pivotal role in elevating our game for all participants, both at the high performance and grassroots levels. I thank Toronto FC President, Bill Manning and Canadian Premier League and Canadian Soccer Business Chairman, Scott Mitchell for their collaboration and leadership in supporting soccer in Ontario.”

“This renewal of our partnership with Ontario Soccer helps us continue to grow the game in Ontario and highlight the pathway for elite players to realize their potential and perhaps one day compete professionally with Toronto FC,” said Toronto FC President Bill Manning. “Together with Ontario Soccer we will continue to lead in the areas of player development and identification, coaching and referee education while connecting on the commercial end with businesses, who want to invest and grow the game.”

This announcement comes at a time of recent successes like the historic Olympic Gold medal for Canada Soccer’s Women’s National Team including 12 Ontario players and the qualification of Canada Soccer’s Men’s National Team for the FIFA World Cup Qatar 2022™, with a roster 80% comprised of players hailing from Ontario, as well as the launch of League1 Canada, which originated in 2014 with League1 Ontario, as the only professional-amateur, standards-based league in the Province, which was acquired by CSB from Ontario Soccer in 2018.

“The development of our players, coaches, referees and administrators is a top priority, with the intent of elevating the game at all levels in Canada,” said Scott Mitchell, Chairman, Canadian Premier League and Canadian Soccer Business. “Establishing this partnership in Ontario is a major step forward and we are proud to play our part in making Canada’s recent successes on the global stage sustainable for generations to come.”

Ontario Soccer applauds both TFC’s and CPL’s long-term vision for the growth of soccer in Ontario and their unwavering commitment to giving back to the grassroots community, which perfectly aligns with the beginning of Ontario Soccer’s new Strategic planning cycle adding tremendous purpose and opportunity to our efforts as we prepare for the world of soccer coming to Canada in 2026.

Founded in 1901, Ontario Soccer is comprised of more than 550 Clubs servicing over 24,000 teams with 380,000 registered players, 70,000 coaches and managers, and 9,500 match officials, as well as countless volunteers, parents and supporters comprising a direct, multi-cultural community of over 1,000,000 Ontarians.

Ontario Soccer develops and delivers exceptional and sustainable programs and services throughout Ontario with the mission of providing leadership and support for the advancement of soccer in collaboration and cooperation with our membership, partners and other stakeholders. Ontario Soccer also operates the Ontario Player Development League (OPDL) - the province’s premier standards-based youth development program and proudly supports Canada Soccer’s National Teams, the Canadian Premier League and Toronto FC.

An overall goal of Ontario Soccer is to assist with the equitable development of soccer as a healthy lifestyle choice, provide a talented pathway for players to excel and encourage inclusive community involvement at all levels.

Toronto Football Club (TFC) is a Canadian professional soccer club based in Toronto. The club competes in Major League Soccer (MLS) as a member of the Eastern Conference. The team plays its home matches at BMO Field, located at Exhibition Place on Toronto’s shoreline west of Downtown Toronto. Toronto FC joined MLS in 2007 as an expansion team and was the first Canadian-based franchise in the league.

The first team is operated by Maple Leaf Sports & Entertainment, which also operates the USL League One affiliate team Toronto FC II and most other professional sports franchises in the city, like the Toronto Maple Leafs of the NHL, Toronto Raptors of the NBA and the Toronto Argonauts of the CFL.

Canadian Premier League (CPL), Canada’s Tier 1 domestic professional men’s soccer league, enters its fourth season in 2022, competing in the CONCACAF and FIFA sanctioned series of competitions. Playing in world-class and unique venues, and partnering with strong community-led ownership groups, the CPL is a league for Canadians, by Canadians that brings professional soccer to eight communities coast-to-coast. The CPL has announced plans to expand to 10 markets in 2023 with a team in Vancouver and a conditional franchise awarded to Saskatoon. For updates and more information, please go to CanPL.ca.

Canadian Soccer Business (CSB) represents a suite of top-tier national assets that are core to the sport of soccer in Canada. This includes representation for all corporate partnerships and media rights (broadcast and distribution) related to Canada Soccer’s core assets including its national teams, along with all rights associated with the Canadian Premier League.