In this squad were 20 players who were born in Ontario, got their start in Ontario or were developed by member organizations in our province 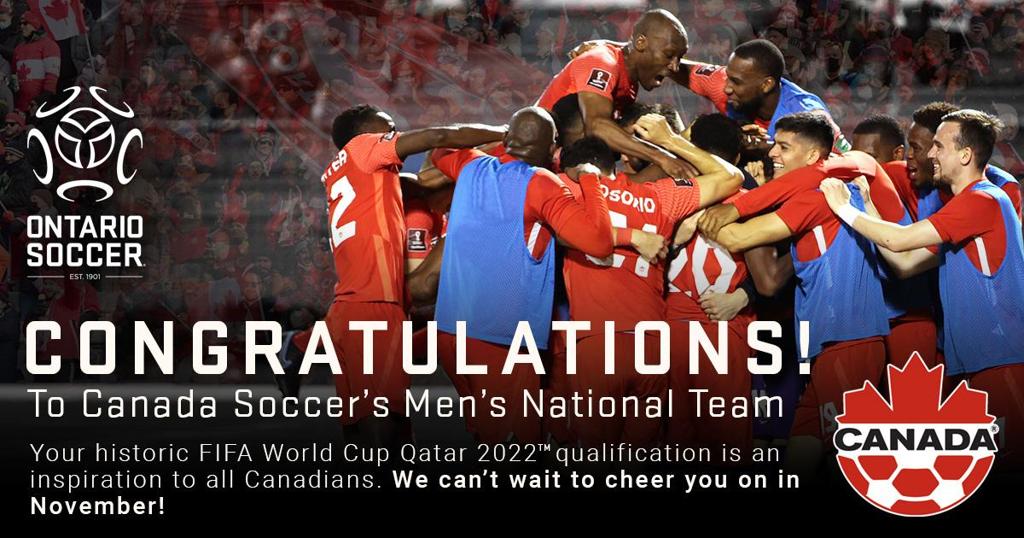 Last summer, the Canadian Women’s National Team won a Gold Medal at the Tokyo 2020 Olympic Games, defeating Sweden in penalties to capture the hearts and minds of soccer supporters across the country.

It is not hard to overstate the momentous nature of their accomplishment.

Today, for the second time in a year, soccer in this country has reached another historic milestone.

Now the Canadian Men’s National Team has qualified for their first FIFA Men’s World Cup since 1986 – nearly 36 years since the last time they were part of the world’s largest global single sporting event.

It is truly another watershed moment for the game in Canada and will leave a lasting legacy for generations to come.

First, congratulations to the Women’s and Men’s National Teams and Canada Soccer. You have inspired a nation to believe that Canadian soccer players are capable of being among the best in the world. Players will now grow up knowing that they can achieve the biggest goal in soccer – playing on the world’s stage. This accomplishment cements an enormous legacy for future generations of players to come.

Second, congratulations to Coach John Herdman, our inspirational leader and the 20 players (Milan Borjan, Tajon Buchanan, Lucas Cavallini, Derek Cornelius, Jonathan David, Stephen Eustáquio, Liam Fraser, Doneil Henry, Junior David Hoilett, Atiba Hutchinson, Alistair Johnston, Mark-Anthony Kaye, Cyle Larin, Richie Laryea, Liam Millar, Kamal Miller, Jonathan Osorio, Dayne St. Clair, Iké Ugbo, Steven Vitória) in this squad, who were born in Ontario, got their start in Ontario or were developed by member organizations in our province. The number of players is a testament to the great work being done by our member Clubs and the Districts that support them.

Ontario’s soccer community is one that works tirelessly behind-the-scenes to help elevate athletes so that they can reach their potential. Many in our community have made great sacrifices to help lift these players and match officials to the highest stage. Coaches, Match Officials, Administrators and Volunteers all share in this accomplishment. Team Ontario has played a big role in this World Cup qualification.

Lastly, thank you to all the soccer families across our great province. These last two years have been the most challenging in our lifetime but you have kept your children focused on the sport they love and on days like today, the light is shining ever brighter on the future of soccer in our province and Canada.

This summer, one where “Everyone is Welcome,” let us keep this historic moment fresh in our minds – both as a reminder of what we are working towards and what is still to come.

The Men’s National Team will begin the next stage of their journey in November, when the FIFA World Cup Qatar 2022™ kicks-off. It is another opportunity to showcase our “Made in Ontario” talent.

And to the players, we wish you the best in Qatar and as it has always been, the Ontario soccer community will be right there behind you, supporting you the whole way.