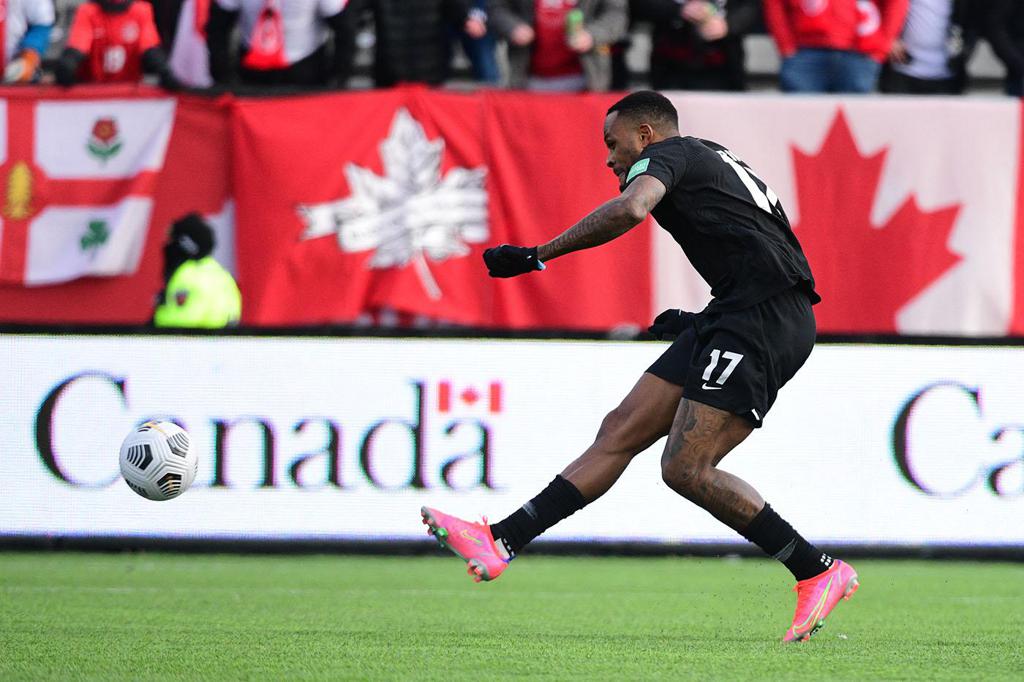 Canada Soccer’s Men’s National Team defeated USA 2:0 at Tim Hortons Field in Hamilton, ON. With the victory, Canada remains undefeated in FIFA World Cup Qatar 2022 Qualifiers and sits atop the table on 22 points, four points ahead of USA with four games remaining.

Cyle Larin (7’), Samuel Adekugbe (90’) scored for Canada. Hometown hero Milan Borjan earned the cleansheet for Canada. Larin’s goal was the 23rd of his career sending him to the top of Canada’s Men’s National Team ‘A’ International scoring leaderboard.

Canada next face El Salvador on 2 February in San Salvador to close out the January window. The match will be carried LIVE across Canada on OneSoccer.ca, Sportsnet, and RDS at 21:00 ET | 18:00 PT.

“We’re living the dream, through the hard work and the effort, we’re living a big moment, this country feels like they’re behind us and we’re nearly there,” said John Herdman, Men’s National Team Head Coach. “It feels like we’re in a football country. Stepping off the bus, the energy was there from the fans and then to go into the game, it was next man up. That’s what this is all about, team spirit. We’ll never stop fighting and we’ve got a football nation behind us now.”

Cyle Larin opened the scoring with a cool finish after a great give-and-go play with Jonathan David (7’). The goal was Larin’s 23rd for Canada and put him in sole first position atop the CanMNT scoring chart in “A” matches.

In the 28’, Steven Vitoria blocked a hard shot to deny the USMNT after a turnover in the Canadian box.

In the 33’, Samuel Adekugbe switched the field with a long cross to Larin but an American defender was able to get his head on it just ahead of the Canadian to prevent a scoring chance.

Just before halftime, Milan Borjan was called into action with a brilliant save to maintain the clean sheet, getting a strong glove up to push away a headed chance off of an in-swinging corner kick by Christian Pulisic (43’).

In the 54’, David was able to beat four US players and stay on his feet to be able to play in a pass to Larin, who sprinted into the box and tried to play a cross back to David, but the two couldn’t quite connect and the ball ended up going out the far side of the penalty area to safety.

Borjan made a solid but straightforward save in the 59’ on a shot taken from the edge of the Canadian penalty area.

In the 62’ David picked out Tajon Buchanan in space with an excellent cross-field pass. Buchanan played a square cross but couldn’t find the run of Larin.

Larin very nearly scored his second of the match after the initial shot from David was saved by the keeper. The rebound fell right to the feet of the on-rushing Larin, but USA goalkeeper Matt Turner was able to make a phenomenal second save to deny him (70’).

In the 76’, Borjan stood tall to cut out a dangerous-looking cross into the box.

The USMNT had an excellent opportunity to tie the score in the 87’. Paul Arriola found himself with tons of space in behind the Canada defence and went for the overhead bicycle kick, making good contact but the shot sailed wide.

In the 89’, Junior Hoilett made a great run down the sideline before cutting inside to get past a defender, and then played a pass to find Adekugbe all alone, but the Canadian defender’s shot went over the crossbar.

In the final minute of stoppage time, Canada was able to double the lead, securing the victory in the process. Kamal Miller’s long clearing effort was taken down brilliantly by Adekugbe with a great first touch around the halfway line. That touch took him past the last defender and clear through on goal and he fired home the shot to make it 2:0 (90+5’).