A new strategy that balances competition and allows the League to continue to grow.

League1 Ontario announced today a significant restructuring of its competition model, as set out in its recently ratified “2024 Plan”, which delivers a new league pyramid to Ontario’s top Men’s and Women’s football environment.

Since forming the League in 2014 the Men’s and Women’s division have experienced unprecedented growth with the demand for clubs having led League1 Ontario to develop a strategy to add more license holders (clubs) without diluting the quality of competition and the value of the current clubs in L1O.

This competition structure is designed to streamline opportunity, calibre of play, and opportunity for growth. More importantly this will help further the playing opportunities for talented senior level men and women of Ontario.

Beginning in the 2024 season, the Men’s and Women’s competitions will be organized into three distinct tiers:

With team movement between these tiers governed by a promotion and relegation system.

On the Women’s side, the 2024 season will see the Premier and Championship Divisions made up of 8 to 10 teams, each kicking off play in April before closing in mid-August. League2 – which will feature a mixture of new expansion sides and “Reserve” teams of each Premier and Championship division club and will begin in May and run until August, with teams split up into regional divisions.

A similar format will exist on the Men’s division, with the Premier and Championship divisions featuring between 10 and 12 teams, also kicking off in April but running into early September. The champion of the Premier Division will represent L1O in Canadian Championship the following year.

As part of this plan, the L1O Board of Directors have decided that new expansion will be paused until 2024, at which time clubs invited to join the League will begin their journey starting at the newly created League2 tier. 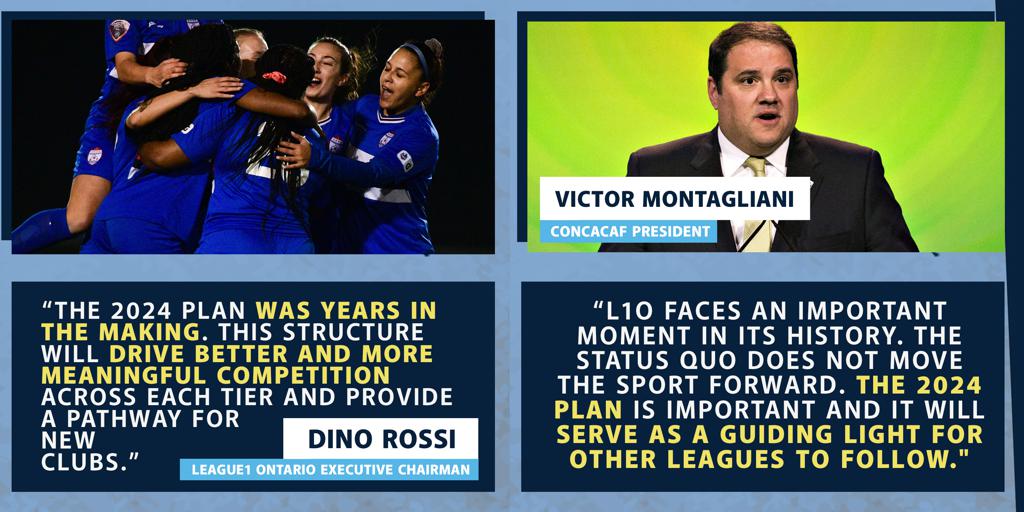 “The demand to be part of League1 has grown so much over the last number of years,” League1 Ontario Executive Chairman Dino Rossi said. “We've achieved a degree of scale that allows for this type of structure to be put in place at this time.”

“League1 started in 2014 with 10 Men’s sides and launched the Women’s division in 2015 with 7 teams. The 2022 season is set to welcome 22 Men’s and 17 Women’s license holders for the Premier Division season,” said Dino Rossi. “The 2024 Plan is needed and will drive better and more meaningful competition across each tier. This is an exciting next step focused on the growth of the game and the depth of talent and potential talent in Ontario.”

This new structure continues to put a focus on the pathway needed to develop players and provide opportunities for growth for League1 Ontario teams and creates and new and unique level of competition at the senior level for men and women.

League1 Ontario is the province of Ontario’s pro-am, standards-based, senior league. Founded in 2014, the league began with a ten team men’s division, which has now grown to 22 teams in the men’s Premier Division and includes a separate 17 team women’s Premier Division. League1 Ontario serves as a stepping stone between the high-performance youth level and elite amateur and professional levels of the game.

Owned and managed by Canadian Soccer Business (CSB) and sanctioned by FIFA through the domestic bodies of Canada Soccer and Ontario Soccer, League1 Ontario’s primary focus is the showcase and development of Canada’s future stars.