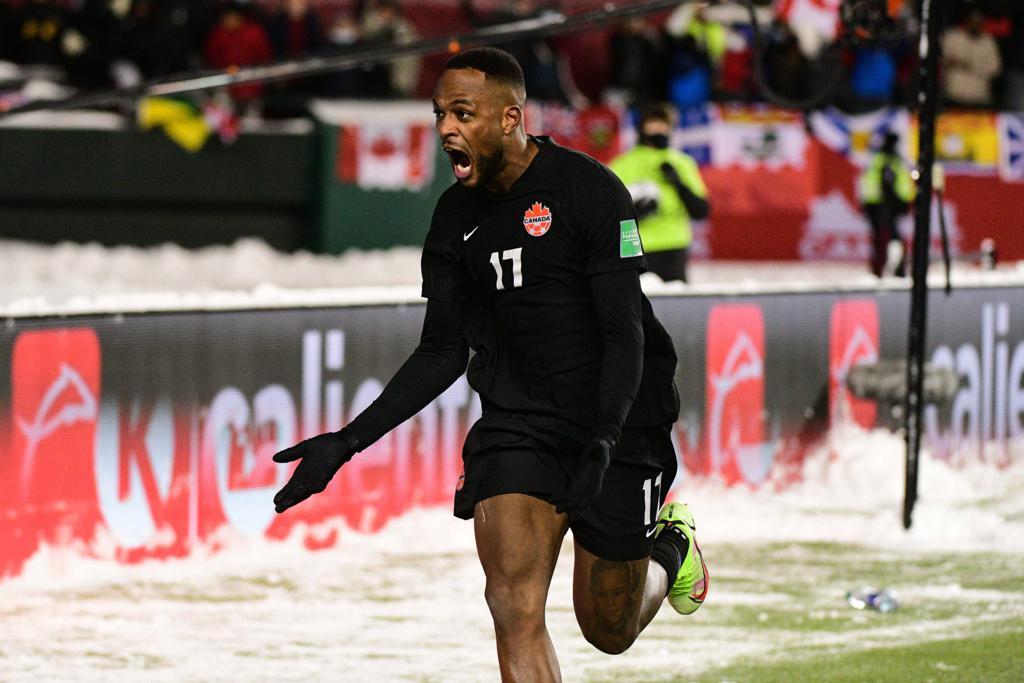 Canada are undefeated at the top of the table in the Concacaf Final Round of FIFA World Cup Qualifiers after a 2:1 victory over visiting Mexico at Commonwealth Stadium in Edmonton, Alberta. The win moved Canada into first place with 16 points from eight matches (4-4-0) ahead of USA (15 points), Mexico (14 points) and Panama (14 points).

Cyle Larin (45’+2 and 52’) scored both goals for Canada, their first over Mexico since the Quarterfinals of the 2000 Concacaf Gold Cup and their first against Mexico in FIFA World Cup Qualifiers since 1976. Captain Atiba Hutchinson became the Men’s National Team’s all-time leader with 90 international “A” appearances while Larin tied Dwayne De Rosario for the most international “A” goals (22).

Doneil Henry set the tone early with a strong challenge in the first minute as Canada looked to defend their unbeaten run at home. It was a scrappy affair throughout the first half in the below freezing conditions.

Canada’s first opportunity of the match came in the 20’ as Tajon Buchanan shook a couple of tackles and looked to play in Richie Laryea, but the pass was too strong and rolled out of bounds.

In the 22’ Canada benefited from a miscommunication between the Mexican goalkeeper and defender that resulted in a corner kick. A strong punch from keeper Guillermo Ochoa was necessary to keep the score even.

In the 24’, Alistair Johnston slid a pass into the feet of Cyle Larin, who was able to take a touch and get a shot on target, but there was no real power behind the shot and it was easily saved.

Milan Borjan was called into action in the 36’, rushing quickly off his slide to cover the ball to break up a dangerous looking Mexico attack before they could create a shot attempt.

In the 43’, Buchanan took a touch to allow himself to turn towards the net but his ambitious shot from distance went high and wide.

In stoppage time, Johnston stepped up aggressively to win a 50-50 ball and followed his header forward. He then volleyed a rocket of a shot from distance which was saved by Ochoa but not held, and Larin was there to pounce on the rebound to give Canada a 1:0 lead going into halftime (45+2’).

In the 47’, Buchanan cut to the line and attempted to pull a cross back to Davies, but the pass was blocked at the critical moment.

Canada doubled the lead thanks to a second goal by Larin early in the second half. Stephen Eustaquio delivered a perfectly placed free kick from out wide to Larin, who touched it past the Mexican keeper (52’). The goal moved Larin into a tie for most all-time goals scored for the CANMNT.

Mexico’s first shot on target came in the 58’ with a deft little touch by Roberto Alvarado, but Borjan was able to catch it. Alvarado had another chance in the 66’ with a near post run, and his low shot forced Borjan to make a solid save to maintain the clean sheet.

In the 69’, Davies looked like he was off to the races past the defence but Ochoa was able to beat him to the ball to clear it away from danger.

As the match got closer to the end, Mexico continued to put more and more pressure on the Canadians. The visitors were able to make it 2:1 in the 90’ when Hector Herrera headed in a cross from Jesus Corona, beating Borjan at the near post.

This set up a tense final five minutes of the match, as Mexico was able to continuously put good crosses into the Canada penalty area and get chances. In the 90+3’, Borjan made a heroic diving save right on the goal line to keep the lead intact and help Canada secure the three points.