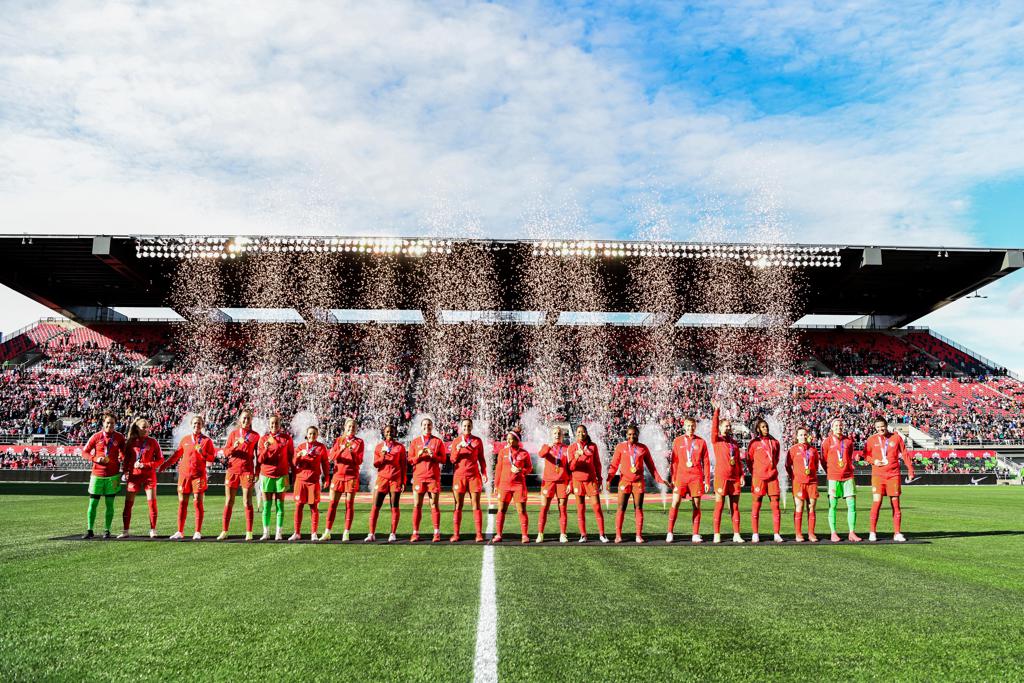 Canada Soccer’s Women’s National Team treated the home crowd to a 5:1 victory over New Zealand in Ottawa, ON in the first match of their Celebration Tour.

Canada’s first chance came in the 7’ when Janine Beckie made a cutting run into the New Zealand penalty area and picked out a pass to Nichelle Prince whose first-time shot was caught comfortably by New Zealand’s keeper, Erin Nayler.

In the 11’, a cross from Beckie on the wing found Christine Sinclair in the box. Sinclair’s attempted touch over the defender caught the arm of the New Zealander and was called for a hand ball in the box. Jessie Fleming stepped up to take the penalty, picked her spot, and once again converted calmly (12’) to give Canada the 1:0 lead.

A few minutes later, Sinclair had the chance to double the Canadian lead after Allysha Chapman and Fleming made a couple of passes out wide that created the space for Fleming to cross the ball into the box. Sinclair’s volley looked like it was headed in on the far side but was blocked by a defender (15’).

Sinclair would get her goal just before halftime. Beckie again played in a great ball from a wide area to the far post, finding Deanne Rose who heads it back into the middle. There was a miscommunication between the New Zealand keeper and defender and Sinclair capitalized on the loose ball, stealing it and floating a shot into the open net for her 188th international goal (42’).

In the 57’, Beckie played a pass through the New Zealand defence that was dummied by Rose and found Prince all alone behind the defenders. Prince took one touch around the keeper and slid the shot home to make the score 3:0.

Sinclair nearly added her second in the 63’, but saw her first shot blocked by a defender and her follow-up shot stopped by a fantastic diving save by Nayler.

New Zealand got one back to make it 3:1 after Chapman’s feet got tangled up with Ava Collins in the box and the visitors were awarded a penalty. Ria Percival’s shot from the spot was too strong for Kailen Sheridan who was able to get her fingers on it but couldn’t keep it out (70’).

Canada added a fourth goal in the 75’. Fresh off the bench, Gabrielle Carle played in a great pass to Beckie who was able to pick out Adriana Leon in the middle of the box. Leon confidently took the shot first time to make the score 4:1.

Leon scored her second goal of the match less than 10 minutes later (82’). Sophie Schmidt played a fantastic ball high down the wing that allowed Beckie to run onto it beyond the defence. Beckie’s shot was saved by Nayler but fell right to Leon who controlled the bounce and tapped the ball into the open net.

Beckie came close to netting a goal of her own just before the end of the match after she was again played in by Schmidt, but was robbed by a great save from the New Zealand keeper (88’).