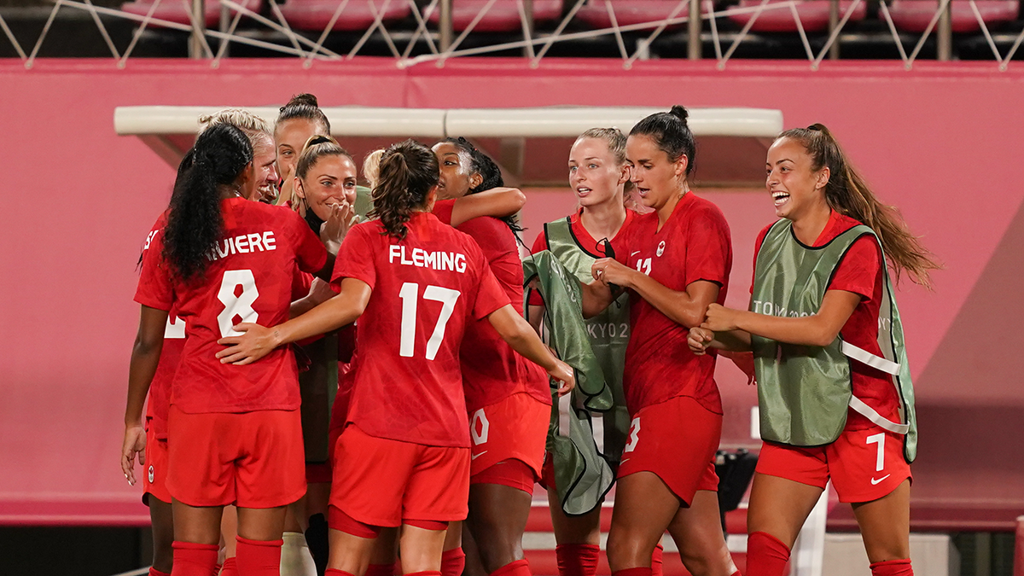 This marks the fourth consecutive time that Canada has advanced to the Women’s Olympic Football Tournament Quarter-Finals. It is also the second time that Canada has gone undefeated in the group stage with a 1-0-2 record having also been undefeated at Rio 2016. Canada is the only nation in the world to reach the podium at both London 2012 and Rio 2016 in women’s football. The team is hoping to make history by getting back on the podium for a third consecutive time.

“To go undefeated in the Group Stage is nothing to scoff at. Across the group stage we’ve had eight debuts at the Olympics. I felt today was a much better Canadian performance getting us ready now for some great tier one opponents,” said Bev Priestman, Women’s National Team Head Coach. “Everyone who stepped in did an unbelievable job, and the strength of this group will be the depth, they can step in whenever needed so no matter what happens moving forward, we’re all ready to go.”

Canada will play their Quarter-Finals match in Miyagi on Friday 30 July at 17.00 local (04.00 ET / 01.00 PT). From the Olympic Quarterfinals, the winners advance to the Semifinals and then a chance to win a medal. The Women’s Olympic Football Tournament runs 21 July through 6 August 2021.

“We are undefeated in three games and we’ve put ourselves in control of our own destiny,” said Stephanie Labbé. “We know what our ultimate goal is, and we’re on our way to that.”

Canada started the match moving the ball well in the rain. Evelyn Viens had a 2’ chance that went wide. Deanne Rose took the ball to the goal line in the 8’ and pulled the ball back to Sophie Schmidt whose shot was blocked.

Canada and Great Britain each spent time working to control the ball through 20 minutes in the first half as the rain slowed. Just after the 20’ mark, Jayde Riviere was able to protect the area with an intervention on a cross. In the 23’ Riviere was booked for a foul. Canada deployed some positional fluidity in the 27’ as Rose swapped wings and created a chance that was broken up. A Viens run in the 41’ created one of Canada’s better first-half scoring opportunities as she pulled the ball back to Leon whose shot was blocked.

After a pair of halftime substitutions, Canada began to look sharp in attack. Leon found space wide in the 49’ and swung a ball into the box that couldn’t find a Canadian attacker. Just two minutes later Huitema was played through by Quinn. Huitema’s pass to Viens was dangerous but Great Britain again were able to block the shot.

Another shot block in the 52’ created a final rebound opportunity for Viens who was replaced by Nichelle Prince in the 54’. Just a minute later, Ashley Lawrence burst forward down the left wing and played a ball into the box that got past four Canadian attackers and the entire Great Britain defence to Leon who made no mistake blasting the ball into the top of the net to give Canada a 1:0 lead in the 55’. Canada took some time off the clock playing the ball around the backline through the 69’ when Great Britain hit the post and the cross bar past a diving Vanessa Gilles. A deflected shot off Nichelle Prince in the 85’ went behind Canadian goalkeeper Stephanie Labbé who had no chance on the play.

Canada’s starting XI featured Stephanie Labbé in goal, Ashley Lawrence at right back, Vanessa Gilles and Kadeisha Buchanan at centre back, Jayde Riviere at left back, and Quinn, Sophie Schmidt, Janine Beckie, Deanne Rose, Evelyne Viens and Adriana Leon from the midfield up through to the attack. Head Coach Bev Priestman replaced Beckie with Jessie Fleming and Rose with Jordyn Huitema (46’), Viens with Nichelle Prince (54’), Quinn with Julia Grosso (67’), and Lawrence with Gabrielle Carle (80’).

Canada are two-time Olympic bronze medal winners (2012 and 2016) and two-time Concacaf champions (1998 and 2010). In all, Canada have participated in seven consecutive editions of the FIFA Women’s World Cup™ (1995 to 2019) and three consecutive editions of the Women’s Olympic Football Tournament (2008 to 2016). At Rio 2016, Canada Soccer’s Women’s National Team were the first Canadian Olympic team to win back-to-back medals at a summer Olympic Games in more than a century.