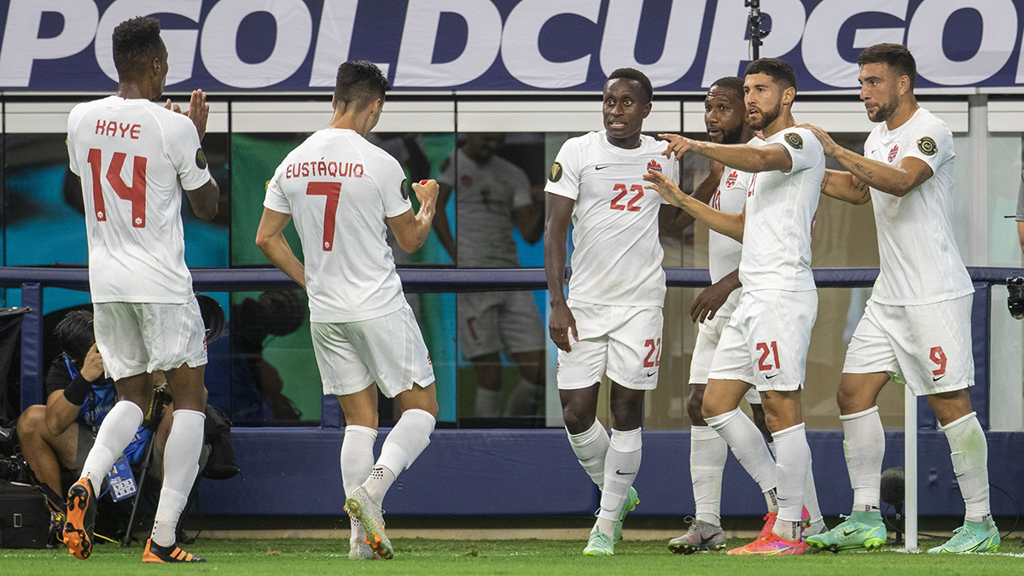 Canada Soccer’s Men’s National Team had a strong team performance to defeat Costa Rica 2:0 in the 2021 Concacaf Gold Cup Quarterfinals. With the victory, Canada advance to meet Mexico in the Semifinals on 29 July at NRG Stadium in Houston, Texas. Junior Hoilett (18’) and Stephen Eustáquio (69’) scored for Canada who advance to the Semifinals for the first time since 2007.

“I think we deserved to win all four matches we’ve played so far. We managed Costa Rica in a way that was important for this team to show their tactical awareness and that brotherhood that you saw when we are pressing Costa Rica for 70 minutes,” said Head Coach John Herdman “It is step by step, that is the key message.  We have been focusing one game at a time.  We keep our feet on the ground and we take it game by game and get ready for the next part of the tournament which is a Semifinal.  I am proud of these boys tonight, that was a big step we took.”

All of Canada’s matches at the 2021 Concacaf Gold Cup are broadcast live on OneSoccer and fans will find extended coverage across Canada Soccer’s digital channels on Facebook, Instagram, Twitter and YouTube featuring the hashtag #CANMNT.

Canada pressured Costa Rica from the opening whistle. With sharp passing, strong tackling, and defensive commitment through the lineup, Canada had the majority of possession through the opening 15 minutes. Eustáquio’s well-timed tackle in the 8’ broke up a spell of Costa Rican possession, and Lucas Cavallini worked all the way back to get in on the defensive action just a few seconds later. In the 18’, Eustáquio spotted a gap in the back line and played a ball over the top to Hoilett who was able to bring it down and hit the jumping half volley over the head of Costa Rican goalkeeper Esteban Alvarado.

Just a few minutes later, centreback Steven Vitória got forward for Canada in the 22’ and his volley on a rebound went just over Alvarado. Vitória earned his second yellow of the tournament a few short minutes later and will miss the Semifinals as will Cavallini, whose yellow in the 39’ was also his second of the tournament. Mark-Anthony Kaye nearly made it 2:0 just before halftime with a spinning attempt that went just over the top of the net.

After Costa Rica made four changes at halftime, Canada returned to its high-pressure formula.  Hoilett’s pass to Cavallini, who played Tajon Buchanan on goal, was one of many crisp, sharp balls the Canadians used to keep Costa Rica from gaining the advantage. Canada’s goalkeeper, Maxime Crépeau, made a fingertips save on a free kick in the 54’ that was his best of the match. Shortly after,  Buchanan continued to show how dangerous he is on the ball, creating for himself and earning a corner after Alvarado made the save.

Man of the Match Eustáquio spent a long spell pulling strings in midfield, using one-touch passing to spring players through on goal in the 57’, and coming close in the 68’ on a shot just wide of Alvarado. In the 69’, Eustáquio had a ball pop up on a deflection after pressure from Hoillet created a poor clearance from Costa Rica which he slotted past Alvarado to make it 2:0. After a number of second-half changes, Costa Rica put Canada under a bit of pressure, but Canada kept up the pressure in a defensive organization.

Eventually, the attacking resumed with Buchanan continuing to cause problems taking the ball to the goal line in the 81’ and working to pull the ball back in front but Alvarado was able to block. Buchanan then played Cavallini through on goal and his shot was just wide in the 84’. Crepeau came out to clear a difficult ball in the 87’ and was able to get it back under control on the rebound. Canada nearly had a third in second half injury time as second half substitutes Theo Corbeanu and Tesho Akindele combined with Akindele’s shot being just tipped over by Alvarado’s diving toe save.

“We played today like it was a final,” said Stephen Eustáquio. “We are a brotherhood. We showed today what Canada is, and we’re going to show it in the next game (against Mexico).”

Canada’s starting XI featured Maxime Crépeau in goal, Alistair Johnston at right back, Steven Vitória and Kamal Miller at centre back, Richie Laryea at left back, and Tajon Buchanan, Stephen Eustáquio, Mark-Anthony Kaye, Jonathan Osorio, Junior Hoilett and Lucas Cavallini from the midfield up through to the attack. Herdman replaced Hoilett and Kaye with Tesho Akindele and Samuel Piette (70’), Cavallini with Doneil Henry (84’), Osorio with Liam Fraser (85’) and Buchanan with Theo Corbeanu (88’).

Through 30 years of Concacaf Gold Cup history, this year marked just the second time Canada opened with back-to-back wins in the group phase, the first time Canada qualified to the knockout phase with one match remaining, and the first time Canada qualified for the knockout phase at three successive Concacaf Gold Cups (2017, 2019 and 2021).  2021 will mark the fourth time that Canada has competed in the Semifinals having previously advanced in 2000, 2002 and 2007.

Canada Soccer’s Men’s National Team are two-time Concacaf champions, previously winning the 1985 Concacaf Championship and 2000 Concacaf Gold Cup. This year marks Canada’s 15th participation at the Concacaf Gold Cup since 1991. Along with their first-place finish in 2000, Canada reached the Semifinals in 2002 and 2007. Across the past five years from 2017 to 2021, Canada were one of only four nations that have finished top-six across all three Concacaf major tournaments: fifth place in Concacaf Nations League A and sixth place at both the 2017 and 2019 Concacaf Gold Cups.