Canada will play their Quarterfinal match on Sunday July 25 in Arlington, TX. 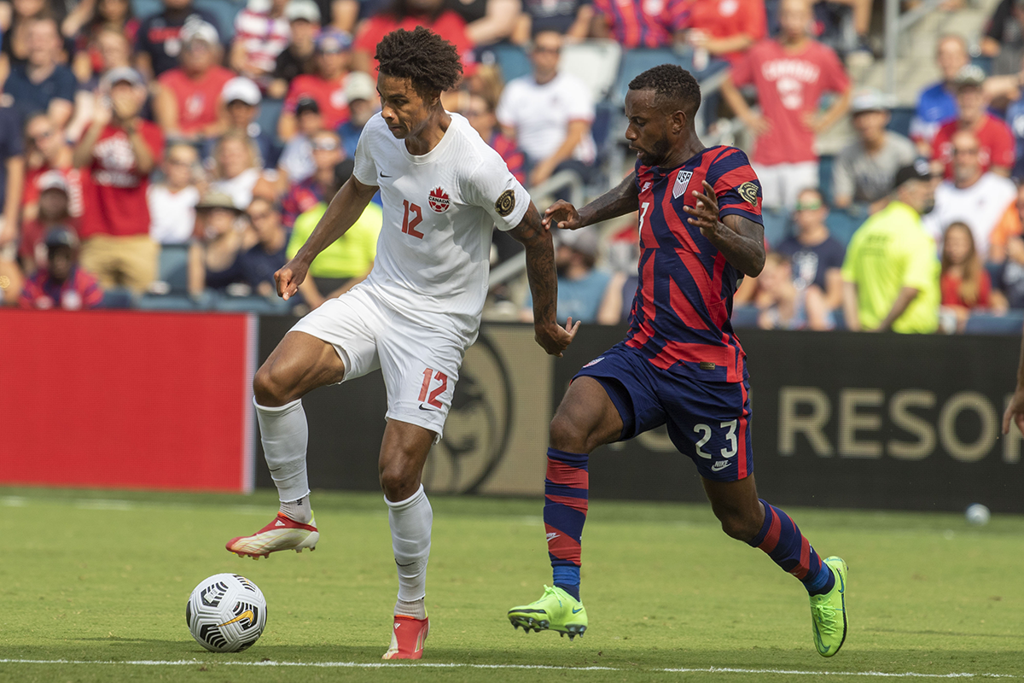 Canada Soccer’s Men’s National Team fell 0:1 to United States in their final Group B matchup at the 2021 Concacaf Gold Cup in Kansas City, Kansas. Shaq Moore’s 1’ goal secured first place in Group B for the USA with Canada advancing as the second-place finisher to a Quarterfinal matchup against the winner of Group C which will be Jamaica or Costa Rica pending their final group stage match on Tuesday 20 July.

Both Canada and USA had already qualified to the Concacaf Gold Cup Quarterfinals after back-to-back wins against Martinique and Haiti to open the group phase. Both nations will play their Quarterfinal match on Sunday 25 July in Arlington, TX.. All of Canada’s matches at the 2021 Concacaf Gold Cup are broadcast live on OneSoccer and fans will find extended coverage across Canada Soccer’s digital channels on Facebook, Instagram, Twitter and YouTube featuring the hashtag #CANMNT.

“I think there’s pride in the effort from the guys as they showed some good adaptability, but we’re disappointed because there was a big chance to beat the US in their home and go top of Group B,” said John Herdman, Men’s National Team Head Coach. “We have seven days until the quarters, so we’ll recoup and get these boys ready for whatever opponent comes next.”

The first minute goal sealed the victory for the USA despite a tremendous effort throughout the remainder of the match from Canada.

With a number of players rested and Stephen Eustaquio unavailable due to yellow card accumulation, Canada were still able to create problems for US goalkeeper Matt Turner forcing a number of saves throughout spells of attack in both the first and second half.

In addition, a first-half substitution of Ayo Akinola who left the match with a right leg injury, and second half injury replacement for Cyle Larin created challenges for Canada.

The US scored almost from kickoff going long off the start. Canada had a few chances to clear, but the ball stayed in the air under pressure until the US were able to get a bit of space, play wide to GK Max Crepeau’s right, and then back across the goal to a streaking Moore who’d left his mark.

Canada nearly got it right back. After a foul in the 3’, Junior Hoilett knocked a ball far post on to the head of Sam Piette, whose effort was saved by Turner.

Five minutes later, a great release pass from Alistair Johnston to Richie Laryea led to a quick combination with Hoilett that sprung Laryea into space. Laryea took the ball into the USA box and was taken down by Walker Zimmerman for a penalty shout that never came.

Canada had a chance in the 37’ as Osorio and Larin combined to create space for Tajon Buchanan in the box. Buchanan laid off for first-half substitute Osorio who took a step, then a touch and fired into traffic.

Buchanan created a couple of first-half injury time chances to close out the half, the best coming to Johnston at the back post after a Larin dummy pass.

Canada started the second half on the front foot as well. A Larin run ended as he was clattered into atop the US box with the ball falling into the path of Buchanan who forced a stop point blank from Turner.

Laryea was taken down in the penalty area in the 50’ for a second time with no call from the referee.

After a pair of second-half substitutions, Johnston and Buchanan combined which led to a curling cross by Buchanan in the 76’ that was just a touch too high for Cavallini and just out of reach of a streaking Johnston at the back post.

Buchanan’s curling effort just a few minutes later (79’) was impossibly close to finding the inside of the back post behind Turner.

Canada had one last chance for goal in second-half injury time with Lucas Cavallini having a go from just outside the box in the 90’ +2. Turner again was able to take the shot.

“We played a good game,” said Richie Laryea. “I thought we got into dangerous places and we should have capitalized on some of our opportunities, but, after going down so early I think we fought very well and we created a lot of opportunities for ourselves.”

Canada’s starting XI featured Maxime Crépeau in goal, Alistair Johnston at right back, Steven Vitória at centre back, Kamal Miller at left back, and Richie Laryea, Tajon Buchanan, Liam Fraser, Samuel Piette, Cyle Larin, Ayo Akinola and Junior Hoilett from the midfield up through to the attack. Herdman replaced Akinola with Jonathan Osorio (24’), Larin with Lucas Cavallini (53’), and Piette and Hoilett with Mark-Anthony Kaye and Tyler Pasher (73’).