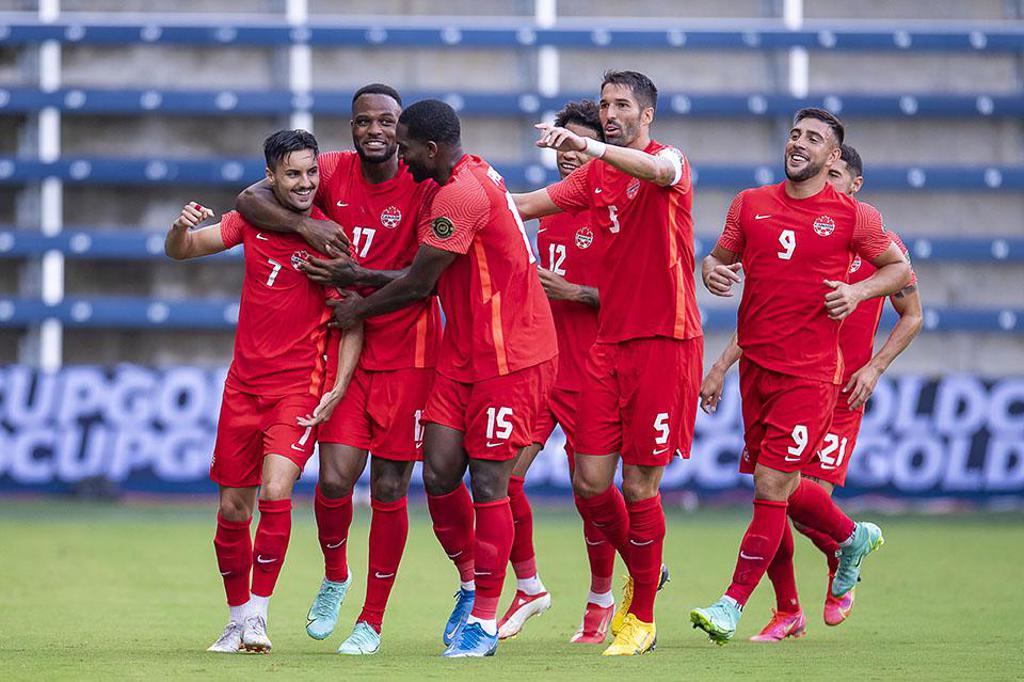 Canada Soccer’s Men’s National Team sit in first place on six points in Group B at the 2021 Concacaf Gold Cup after defeating Haiti 4:1. Cyle Larin (2), Stephen Eustáquio, and Junior Hoilett scored for Canada. Canada are tied with the USA on six points atop Group B with 2-0 records and a +6 goal differential but hold the first place tie breaker heading into the their final Group Stage match against the USA and will advance as the Group B winner with a win or a draw in the match on goals scored.

With his two goals, Cyle Larin became the sole leader for Men’s National Team goals in a single calendar year, breaking a tie with both Jonathan David and Lucas Cavallini who each scored 8 in 2019. Larin has also set a record by scoring in four straight games with10 goals so far in 2021. In addition, Head Coach John Herdman notched his 20th victory at the helm of the Men’s National Team, moving him into a tie for second place all-time with Stephen Hart in career victories and one behind leader Bob Lenarduzzi who has 21. Ayo Akinola and Tyler Pasher each made their Canadian Men’s National Team debuts in the victory.

“We started fast tonight and that was the focus, to get out there and be first. It was great to see the intensity they started with. With Haiti, they’re never going away, with their athleticism and their spirit to keep fighting, they’re a hard team, said Head Coach John Herdman.  “I think tonight the boys were really professional about how they managed themselves in a game that was so physical against Haiti.”

All of Canada’s matches at the 2021 Concacaf Gold Cup will be broadcast live in Canada on OneSoccer, with Canada’s final Group Stage match on Sunday 18 July against the hosts USA (16.00 local / 17.00 ET / 14.00 PT), with only the top-two teams from the group advancing to the Concacaf Gold Cup Quarterfinals. Fans will find extended coverage across Canada Soccer’s digital channels on Twitter, Instagram, Facebook and YouTube featuring the hashtag #CANMNT.

“(Getting the record) feels good, but, it feels better to win for the team. I was happy to get three points and move on to the US,” said Cyle Larin. “We’re going into the next game with confidence. I know we went through a little spell, but, it’s always a good match against the US and we’re heading in with confidence.”

Canada started on the front foot with Tajon Buchanan picking up where he left off with penetrating runs down the left wing. This time, Buchanan’s combinations with Larin created opportunities for Canada early, leading to a early chance in the 3’ minute that led to a Canada corner. On the ensuing play, Lucas Cavallini drew a foul at the top of the box to earn Canada a free kick, which he and Stephen Eustáquio stood over in the 5’. After a Cavallini run up, Eustáquio’s pure strike squeezed into the left side of the net behind goalkeeper Brian Sylvestre.

Haiti made things difficult in the middle of the pitch for stretches of the first half while looking to counter. Buchanan, however, continued to operate out wide creating a pair of chances in the 21’ including one for Mark-Anthony Kaye that a Haitian defender narrowly took off his boot in the box.

Maxime Crepeau was forced into making a point blank save in the 23’ minute on what was eventually called offside. Haiti pressured Canada for a spell through later stages of the first half, but, Canada was able to go into halftime with the 1:0 lead.

After drawing a yellow card in the 48’ when Alistair Johnston was taken down wide right, Buchanan showed once again that his pace and attacking prowess can create problems. After a quick wall pass with Jonathan Osorio, Buchanan took the ball to the goal line before pulling it back into the box where both Cavallini and Larin awaited. Cavallini had the ball knocked away from a sliding defender, but Larin made no mistake scoring his record-setting 9th goal of 2021 in the 52’.

Haiti pulled one back four minutes later off a through ball to Stephane Lambese in the 56’.

After Herdman made his first three changes of the match in the 66’ Canada gained momentum. Shortly after Kaye hit the post on a deflected shot, Larin threaded a brilliant ball to the back post just beyond a sliding Junior Hoilett. A waiting Buchanan got a shot on net that hit the post and Sylvestre was out of danger momentarily.

As Canada recycled the ball, Richie Laryea was sent through by Cavallini and taken down in the penalty area. After a brief spell, the referee was called to review the play at the VAR screen and awarded Canada the penalty which Larin buried in the 74’.

Debutant and second-half substitute Ayo Akinola got straight into the action in the 77’ drawing a second penalty after being taken down in the box. Haiti received a red card and Hoilett stepped up to score a fourth for Canada in the 79’.

Eustáquio earned a late yellow card for Canada meaning he will miss the last Group Stage match Sunday against the United States.

The 2021 Concacaf Gold Cup provides Canada’s exciting young team with an important opportunity to build momentum and gain valuable experience while playing meaningful matches against some of the top nations in the region ahead of the Concacaf Final Round in FIFA World Cup Qualifiers.