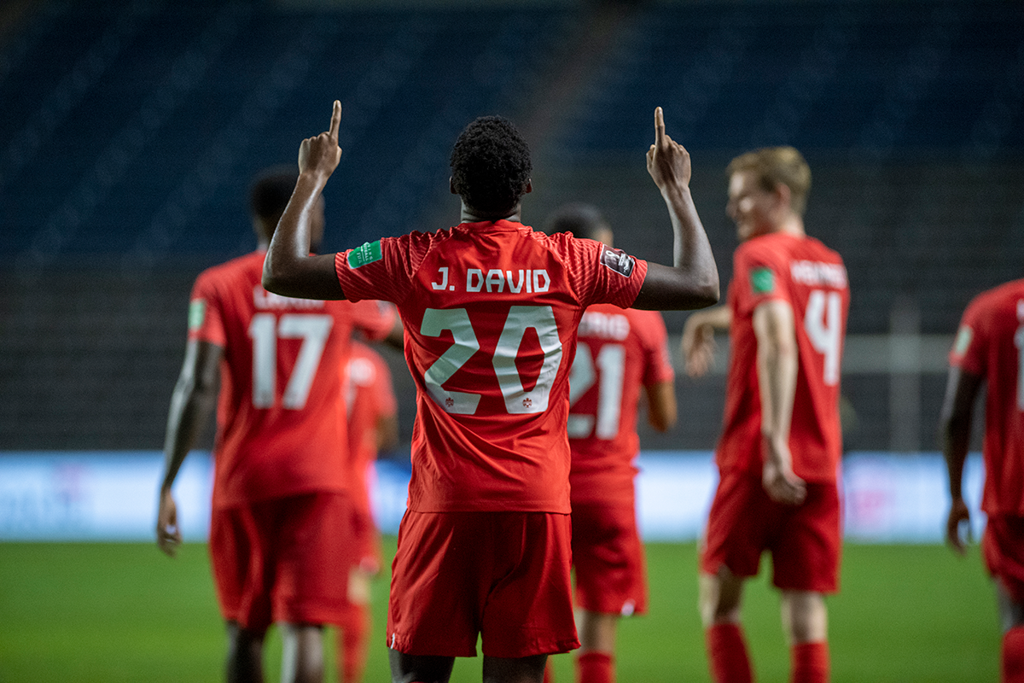 Canada advanced to Concacaf’s Second Round of FIFA World Cup Qualifiers Qatar 2022 with an emphatic 4:0 win over Suriname on Tuesday night in Chicago. The win keeps Canada Soccer’s Men’s National Team perfect in 2021 with four-straight wins to finish atop Group B as they advance to a head-to-head series against Haiti.

The two-match series will be played 12 June in Haiti and 15 June back in Chicago, Canada’s home away from home amidst travel restrictions during the global pandemic. Both matches will be broadcast live on OneSoccer. Should Canada advance past the Haitians, they would qualify for the Octagonal from which three teams will advance to Qatar with the fourth-place team playing an intercontinental playoff.

“We knew Suriname were going to be a tough test, they were riding a bit of a high coming out of their last game. We always knew if we could weather that storm and stick to the process that we’d be in good shape.” said John Herdman, Men’s National Team Head Coach. “The universe has brought us that (Haiti) game, we wanted it back. No better than an opportunity to go into their hometown and have that experience for the players. I don’t need to do motivational speeches for this team, now. They’re crystal clear, the purpose is there and you’ve seen the passion tonight.”

Canada had a big chance in the 17’ when Richie Laryea’s shot from distance was saved off the post by goalkeeper Warner Hahn. On the play, it was a great through ball for Jonathan David whose shot was saved into the path of Laryea.

Canada took the 1-0 lead on the Davies goal in the 37’ minute, his fourth in the last three matches and his ninth career goal since 2017. On the play, debutant Scott Kennedy played it forward to David who turned and played it into the box. Suriname right back Kevin Leerdam got a touch on the ball, but he wasn’t quick enough as Davies sped in around him and fired the next touch through the legs of the goalkeeper.

With the goal, Davies also became the first Canadian since Paul Peschisolido in 1996 to score in three-straight FIFA World Cup Qualifiers in the same year.

In the 60’, David made it 2-0 after he was played through on goal by Davies. David’s low shot from inside the box after he outran the centre back Shaquille Pinas.

In the 73’, David scored again after Davies fought his way through a pair of defenders, fell over, got back up and played a ball to David’s back foot. David re-set his feet and coolly buried it into the top corner with his left foot.

Just five minutes later, Mark-Anthony Kaye threaded a pass into the box to a wide-open Lucas Cavallini who was taken down in the box to earn a penalty. David, on a hat trick stepped up and slotted it home. With the hat trick, it marked the first time ever that Canada scored hat tricks in three international matches in the same season, with David joining Cavallini as just the second player to ever to score three hat tricks for the Men’s National Team. David’s third goal was the 15th of his international career.

“We played well in a new formation in a game that was slow in the beginning trying to figure out how we were going to break them down,” said Alphonso Davies. “We’re happy that we were able to take the lead and then start playing the way that we know how to play and the right opportunities came and we put our goals away. The connection (with Jonathan David) is good, every time I try to find him he’s been in the right position.”

Canada’s starting XI featured Milan Borjan in goal, Alistair Johnston at right back, Doneil Henry at centre back, Scott Kennedy at left back, and Samuel Piette, Richie Laryea, Stephen Eustáquio, Jonathan Osorio, Alphonso Davies, Cyle Larin, and Jonathan David from the midfield up through to the attack. In the second half, coach John Herdman replaced Cyle Larin with Lucas Cavallini, Jonathan Osorio with Mark-Anthony Kaye (66’), and Alphonso Davies with Sam Adekugbe, Jonathan David with David Wotherspoon, and Richie Laryea with Tajon Buchanan (82’).

“We’ve created something here, a brotherhood based on a shared purpose to qualify this team to the FIFA World Cup,” said Herdman. “They care about each other and that’s the first thing. They care about taking this team to the FIFA World Cup and you saw it in March when they had a chance to be back together and build on that spirit in the Canada shirt.”

Canada Soccer’s Men’s National Team, two-time Concacaf champions, were one of only four nations that have finished top-six across all three of Concacaf major tournaments across the past three years: fifth place in Concacaf Nations League A and sixth place at both the 2017 and 2019 Concacaf Gold Cups. In 2019 against Concacaf’s top three nations, Canada earned a victory against USA in Concacaf Nations League as well as eliminated both Mexico (U-15) and Costa Rica (U-17) in Concacaf youth competitions.

It will be an exciting yet busy summer of soccer for Canada Soccer’s Men’s National Team Program in 2021. On the heels of FIFA World Cup Qatar 2022™ Qualifiers in June, Canada will participate in the 30th anniversary edition of the Concacaf Gold Cup, with their Group B matches scheduled in Kansas City on 11 July against Martinique, 15 July against a yet-to-be-determined Caribbean nation from the preliminary round, and 18 July against USA. The top-two nations from Group B advance to the final round with the Quarterfinals on 24 July, the Semifinals on 29 July, and the Final on 1 August.

Concacaf established Canada’s pathway for FIFA World Cup Qatar 2022™ Qualifiers beginning with a First Round being played amongst the Concacaf Member Associations ranked 6-35 based on the FIFA Men’s Ranking as of 16 July 2020. The Second Round will feature three home-and-away series featuring the six First Round winners.