From Brampton to Istanbul, take in leadership lessons from a Canadian soccer icon on Wednesday May 26 at 1 p.m. 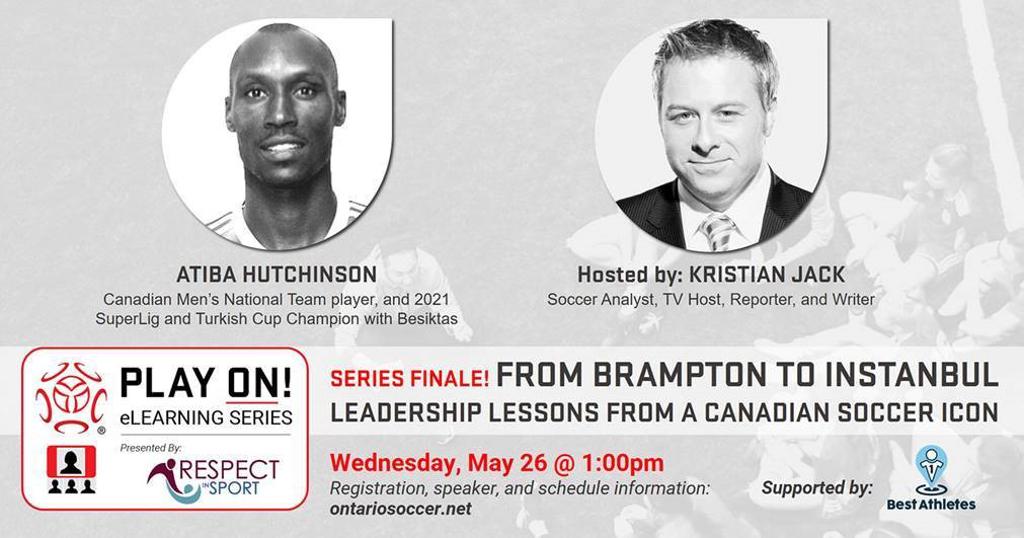 With a safe Return to Play for the 2021 Outdoor Season coming ever closer, Ontario Soccer is excited to end its Play ON! eLearning Series presented by Respect in Sport on a high note on Wednesday, May 26th at 1:00 pm. The eagerly awaited Season Finale of the popular Play ON! Series will provide soccer leaders from across the province and beyond with a final opportunity to come together to get educated, energized and inspired.

This 11th and final episode of the Play ON! eLearning Series will feature a fireside chat with two absolute leaders in the Canadian soccer sphere. Under the title: “From Brampton to Istanbul – Leadership Lessons from a Canadian Soccer Icon” popular soccer analyst, TV host, reporter and writer Kristian “KJ” Jack will host an intimate and interactive conversation with Canadian Soccer Icon Atiba Hutchinson, who knows all about overcoming the odds in making it as a true product of the Ontario Soccer system to reach the world stage professionally, while proudly representing Canada.

Together, they will invite the audience to join them to explore Atiba’s incredible journey from his beginnings as a stand-out talent at the Ontario Community Club Level in Brampton and graduate of the Ontario Provincial Team and then newly founded National Training Centre Program in the early 2000s. Atiba will share anecdotes and key learnings from being a young Ontario Soccer athlete with big dreams and aspirations to becoming an internationally recognized and celebrated soccer star and serial winner of numerous team and personal awards throughout an illustrious career spanning almost two decades.

International stints in Sweden, Denmark (where he was the first North American player ever to receive the Danish Super Liga Player of the Year Award), the Netherlands and a highly successful era in Turkey with Beşiktaş Istanbul, recently accentuated by winning both the 2021 Superlig Championship and the Turkish Cup,  saw Atiba win the adoration of fans everywhere, while with his proud Ontario roots he always remained a humble and impactful ambassador for his home town, province and country.

It is this unique combination of modesty, legendary work ethic, powerful skills and immense talent that also turned him into one of the most influential players in the history of the Canadian Men’s National Team for many years, amassing seven goals in 85 appearances and still playing a pivotal role for the team today. Moreover, in 2012 as part of Canada Soccer’s centennial celebration, he was named to the all-time Canada XI men's team.

Highlighting the key lessons learned throughout Atiba’s career, the session will provide soccer leaders in the audience with pointers and inspiration that they can apply in their own environments, as they prepare to bring back soccer in communities across Ontario and learn how resilience and a “can-do” attitude will help you reach your goals in your own Return to Play efforts.

In closing, Ontario Soccer wishes to extend our deepest gratitude to all the amazing presenters and hosts throughout the series, who graciously contributed of their time, insight and experience, to give back to the soccer community in Ontario.

We would also like to thank all the soccer leaders in the audience, who made the weekly webinars a staple in their schedules, which enabled us to bond as a team, learn from each other and take solace and strength from the realization that we are not alone in this epic battle against COVID-19.

Of course, we would also like to sincerely thank our series presenting partners from Respect in Sport, as well as today’s Season Finale partner from Best Athletes for their excellent support.

We expect much further progress to be made in the weeks to come towards a safe Return to Play, so please stay well, stay safe and let’s continue to Pitch In. Play ON!