Canada win Group B after 2:0 win over Mexico at the Concacaf Women's Olympic Qualifying Championship

London's Shelina Zadorsky scored in the win. Canada now faces Costa Rica in the Semi-final. The must-win game kicks off at 4 p.m. on Friday night at Dignity Health Sports Park in Carson, California 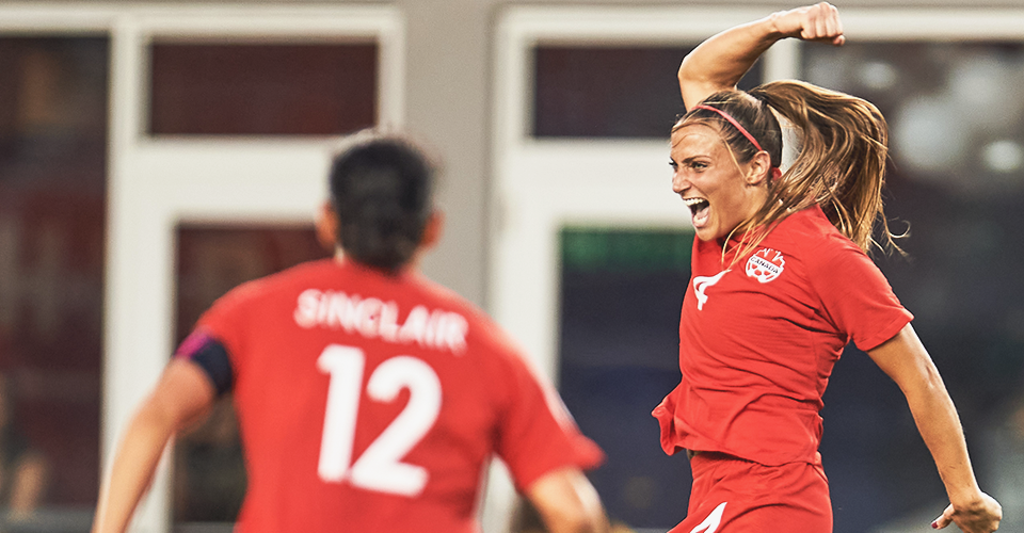 Canada will face Costa Rica in a must-win Semi-final playoff match for a spot at the Tokyo 2020 Olympic Games after winning Group B at the Concacaf Women's Olympic Qualifying Championship. Canada finished first in their group with a perfect nine points after a 2:0 win over Mexico in the group finale on Tuesday 4 February in Edinburg, Texas. Christine Sinclair and Shelina Zadorsky were the Canadian goalscorers.

Sinclair, who for the first time featured in her Nike Phantom VNM red custom boots commemorating her all-time international goal-scoring record, recorded the 186th goal of her illustrious career. With goals scored in 131 international “A” matches, it also marked the 100th time that Canada won with Sinclair as one of the goalscorers.

“I think it’s a resilient team, we knew today coming out that we were going to have a little more adversity against Mexico, we knew that they were going to throw a little more at us and we were ready,” said Canada’s goalkeeper Stephanie Labbé.  She added “it doesn’t matter who steps in there, we had different people in the back line, different people in midfield, it doesn’t matter who’s in there, this team is resiliant and they push through this adversity. “

Goalscorer Shelina Zadorsky noted that the team’s performance to date and the upcoming Costa Rica Semi-final match, goalscorer Shelina Zadorsky means everything. “That’s why we’re here. We came here to get 9 points in the group stage, and we now want to qualify and we want to win the tournament, Zadorsky said. “We set the bar high for ourselves, and we know the competition keeps getting harder and harder, so we have to reflect and keep improving our performances.”

With 22 goals scored across three group matches, it was Canada’s highest offensive output in a Concacaf group phase since 2002 when they scored 23 goals in three matches. With Zadorsky scoring her second career goal in the Tuesday night win, nine different players have scored for Canada across the 2020 group phase: Jordyn Huitema (six), Adriana Leon (four), Janine Beckie (three), Sinclair (three), Ashley Lawrence (two), Jessie Fleming (one), Jayde Riviere (one), Deanne Rose (one), and Zadorsky (one).

Canada opened the scoring in the 26' after a give-and-go combination down the right wing from Jayde Riviere to Janine Beckie to Riviere. Into the box, Riviere centered her pass for captain Sinclair who one-timed her right-footed shot past goalkeeper Emily Alvarado.

In the 41', Canada nearly struck again, this time from distance after a combination of passes in the midfield ended with a Beckie shot that rattled the crossbar.

Then in added time of the first half, Zadorsky made it 2-0 for Canada with a left-footed shot that beat both defenders and goalkeeper alike. This time, it was a Beckie corner kick that drifted to Kadeisha Buchanan at the back post; Buchanan controlled the kick and played it to Zadorsky at the top of the box who quickly fired her first-time low shot through the crowd of players.

In the second half, Mexico applied some pressure and ultimately forced goalkeeper Stephanie Labbé to make a pair of excellent saves, but the Canadian backline held up for the clean sheet.

Into the last 15 minutes, Canada again created the better chances, with Nichelle Prince just wide of the target in the 81' and then just moments later Fleming nearly connecting on a pass through from Huitema.

In the 91', Canada nearly scored again after a cross from Lawrence down the right wing. Huitema headed the cross from the centre of goal, but Alvarado made a terrific, point-blank save. Prince nearly scored on the rebound, but Mexico cleared on the last dangerous chance of the game.

Canada’s starting XI featured Stephanie Labbé in goal, Jayde Riviere at right back, Kadeisha Buchanan and Shelina Zadorsky at centre back, Gabrielle Carle at left back, and Desiree Scott, Sophie Schmidt, Jessie Fleming, Nichelle Prince, Janine Beckie, and Christine Sinclair from the midfield up through to the attack. In the second half, coach Kenneth Heiner-Møller replaced Riviere with Ashley Lawrence (46’), Sinclair with Jordyn Huitema (66’), and Buchanan with Rebecca Quinn (75’).

From eight nations, Canada, Costa Rica, Mexico and USA all advanced to the Concacaf semi-finals through the group stage. On Friday 7 February, only the two winners of the Concacaf Semi-finals will qualify for the Tokyo 2020 Olympic Games as well as advance to the Sunday 9 February Concacaf Final.

“The Concacaf Women’s Olympic Qualifying Tournament is a big event and we need to be ready,” said Kenneth Heiner-Møller, Canada Soccer’s Women’s National Team Head Coach. “The biggest multi-sport event in the world is only a few months away and we want to deliver a massive performance in Japan, but to do that we need to qualify. We need to focus on our performance in these matches to get there.”