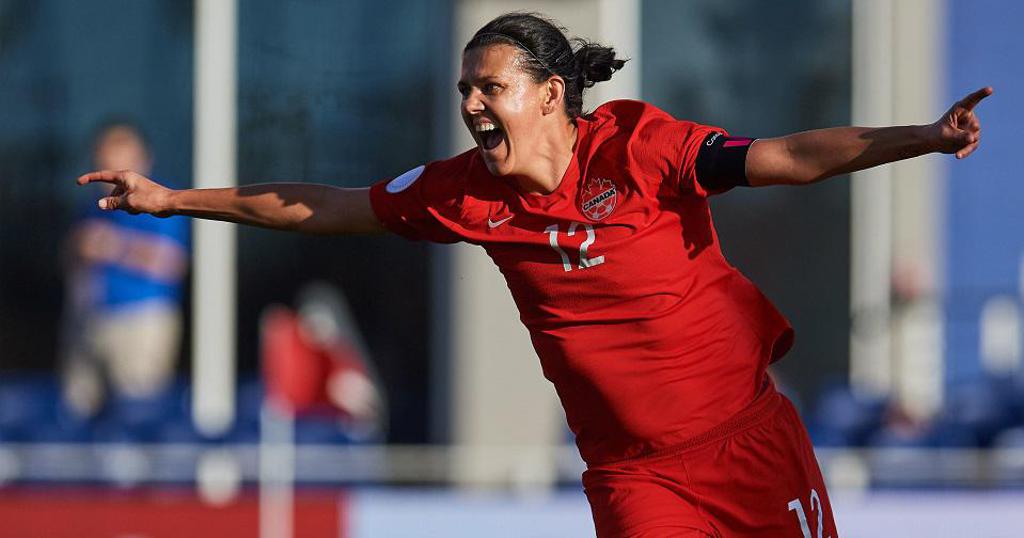 “I’m a very proud Canadian, and when I first joined the National Team, I had goals and dreams and aspirations of passing Mia Hamm one day. I obviously should have aimed higher, not knowing that Abby Wambach would have beaten her, but I never could have imagined reaching the totals that I have. For all who have supported me through my career, a massive thank you,” said Christine Sinclair on setting the all-time international goalscoring record.

“It’s a massive privilege to be part of this. It is history created right in front of your eyes and something I’m only a tiny little part of and it’s such a privilege and I’m so happy for Sinc,” said Head Coach Kenneth Heiner Møller on Sinclair’s milestone night.  On the result, he commented that “We’ve been working a lot with our movements, no matter the opposition, and our movement is crisp. There are some things we need to work on, some early crosses and stuff but we’ve got players who can score from most positions.”

This was the first of three group matches for Canada at the 2020 Concacaf Women’s Olympic Qualifying Championship in Edinburg, TX, USA, the eight-nation confederation championship from which two nations will qualify for the Tokyo 2020 Olympic Games. Canada will next face Jamaica on Saturday 1 February (16.30 local / 17.30 ET / 14.30 PT) and then Mexico on Tuesday 4 February (17.30 local / 18.30 ET / 15.30 PT). Canadian fans can watch every Concacaf match live on OneSoccer.ca as well as Canada’s matches live on Rogers TV. Fans will find extended coverage across Canada Soccer’s digital channels on Facebook, Youtube, Instagram, and Twitter featuring the social media hashtag #CANWNT.

Sinclair opened the scoring with a penalty strike before Leon scored her first of four goals just five minutes later. On the second goal, Jessie Fleming played it down the wing for Riviere who centered for Leon to knock it in. Then six minutes later, Ashley Lawrence made it 3-0 on a shot from the distance.

Then in the 23rd minute, Sinclair made history with her 185th international goal. On the play, Fleming won the turnover from Calvonis Prentice, moved towards goal and played it to Adriana Leon, then Leon played it to Sinclair who finished with a right-footed shot from inside the box.

With the record set, Canada continued their scoring. Leon made it 5-0 after she was sprung through on a run into the box in the 26th minute; Riviere made it 6-0 on a shot from distance in the 40th minute; and Leon scored her third of four goals in the 43rd minute.

For this historic match, Canada’s starting XI featured Kailen Sheridan in goal, Jayde Riviere at right back, Ashley Lawrence at left back, Kadeisha Buchanan, Sophie Schmidt and Shelina Zadorsky along the back, and Julia Grosso, Gabrielle Carle, Jessie Fleming, Adriana Leon and Christine Sinclair from the midfield up through to the attack.

CANADA AT THE CONCACAF WOMEN’S OLYMPIC QUALIFYING TOURNAMENT
Beyond the group phase, the top-two nations in each group will advance to the Concacaf Semi-finals, to be played on Friday 7 February in Carson, California near Los Angeles. The Group B winner (Canada’s group) will face the Group A runner-up (Costa Rica, Haiti, Panama or USA) while the Group B runner up will face the Group A winner. Only the two winners of the Concacaf Semi-finals will qualify for the Tokyo 2020 Olympic Games as well as advance to the Sunday 9 February Concacaf Final.

“The Concacaf Women’s Olympic Qualifying Tournament is a big event and we need to be ready,” said Kenneth Heiner-Møller, Canada Soccer’s Women’s National Team Head Coach. “The biggest multi-sport event in the world is only a few months away and we want to deliver a massive performance in Japan, but to do that we need to qualify. We need to focus on our performance in these matches to get there.”