In 2019, David set a Men’s National Team joint-record with eight international goals, including a Canada record six goals at the 2019 Concacaf Gold Cup. 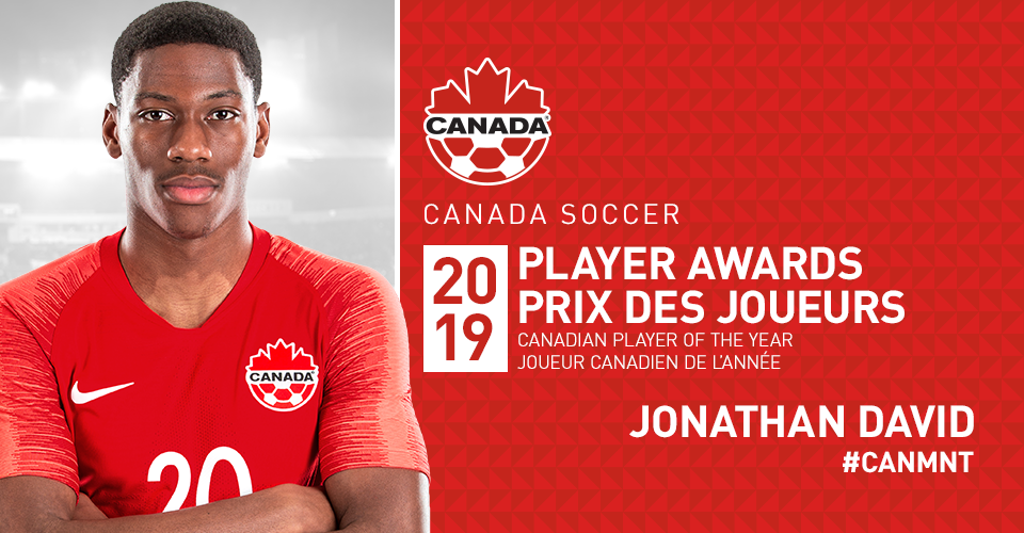 Jonathan David has been voted the Canadian Player of the Year for the first time after a record-breaking season with Canada Soccer’s Men’s National Team and professional club KAA Gent in Belgium and UEFA Europa League. The Canadian teenager was both a tournament All-Star and Golden Boot winner at the 2019 Concacaf Gold Cup as Canada reached the quarterfinals.

In 2019, David set a Men’s National Team joint-record with eight international goals, including a Canada record six goals at the 2019 Concacaf Gold Cup. David was Canada Soccer’s Player of the Month in June and September, notably scoring a memorable world-class goal in the home victory in September after controlling a Mark-Anthony Kaye pass on the run and then evading a pair of Cuban defenders before slipping the ball through the goalkeeper’s legs.

David of Ottawa, Ontario was honoured from a vote shared by Canadian media and Canadian coaches. His co-winner from the Women’s National Team will be announced on Thursday 12 December.

“Jonathan David is a great role model for young players because humility and talent is always a great combination,” said John Herdman, Canada Soccer’s Men’s National Team Head Coach. “He’s always made himself available to represent his country and he has delivered with performances and goals. We are proud to have Jonathan David as one of our own and pleased his hard work has received recognition.”

At the club level, David has scored 20 goals and 12 assists in the first 11 months of the year across league and cup competitions. Those totals include three goals and three assists in the back half of the 2018-19 Belgian season, four goals and one assist in the 2018-19 playoffs, nine goals and six assists to start the 2019-20 season, two goals in 2019-20 UEFA Europa League Qualifying, and two goals in 2019-20 UEFA Europa League group phase from which KAA Gent has already secured a spot in the Round of 32 knockout phase.

Counting his 28 goals scored for both club and country, David is Canada’s highest scoring forward in a single year over the past 20 years. Since the turn of the century, only five other Canadians have scored 20+ goals in a calendar year, with Hall of Fame honoured member Tomasz Radzinski having set the benchmark with 24 goals scored in 2000 (after scoring a personal-best 27 goals in 1999). Over the past two decades, Radzinski has been followed by Simeon Jackson (23 goals in 2009), Olivier Occean (21 goals in 2011 and 20 goals in 2015), Dwayne De Rosario (20 goals in 2011), Cyle Larin (22 goals in 2015), and now David.

This past year, Canada tied a Men’s National Team record with six competitive victories in a single year, including a historic 2:0 victory over USA in Toronto on 15 October. Across Concacaf Nations League Qualifying, the Concacaf Gold Cup, and Concacaf Nations League A, Canada posted six wins and three losses, also tying a record with six consecutive wins in a streak that ran from 14 March 2018 through 15 June 2019. Along with reaching the Concacaf Gold Cup quarter-finals in back-to-back competitions for the first time in a decade, Canada set a Men’s National Team record with 28 goals scored in a year (2019) and 13 consecutive matches with at least one goal (2018 through 2019).

David, 19 years old, has already made 12 international appearances for Canada Soccer’s Men’s National Team since making his debut on 9 September 2018. He played his youth football in the nation’s capital with Gloucester Hornets and Ottawa Internationals before turning pro with KAA Gent. He was 15 years old when he made his debut in the Canadian youth program in 2015.