17 of the 23 players selected for the squad hail from Ontario. Canada kicks off the competition against Martinique on June 15 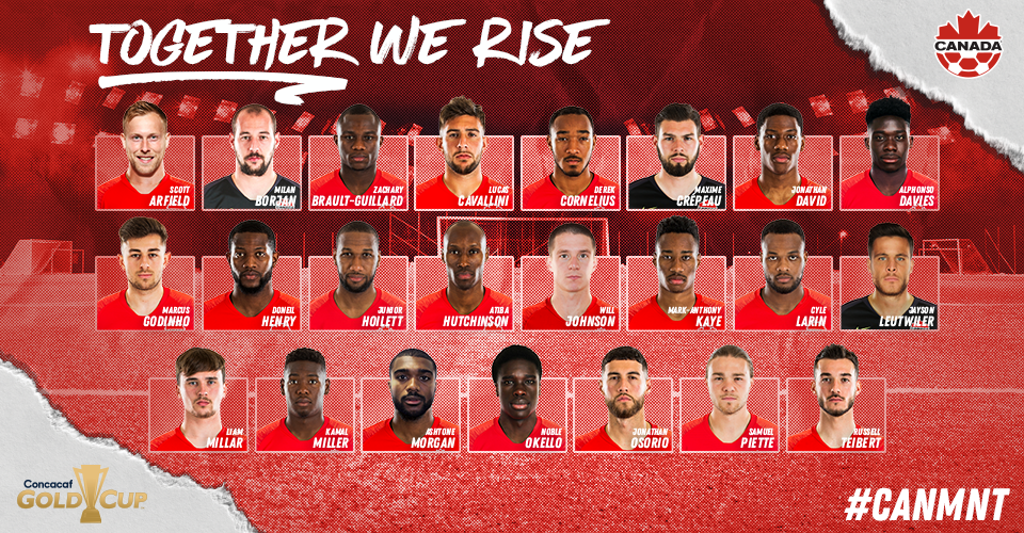 Canada Soccer have selected their squad for the 2019 Concacaf Gold Cup, the confederation’s championship that kicks off 15 June at the Rose Bowl in Pasadena. The biennial competition provides a tremendous opportunity for the Canadian squad as they face Concacaf’s top nations for the first time since reaching the Quarter-finals in 2017.

“We laid a good foundation culturally and tactically through Concacaf Nations League Qualifying and the team seem focused and ready to push each other and the country as far as they can in the 2019 Concacaf Gold Cup,” said John Herdman, Canada Soccer’s Men’s National Team Head Coach. “The tournament will be tough with the quick turnaround of games, the travel schedule and playing at altitude in Denver against a very good opponent, then to the heat and humidity of Charlotte, but this is what you want as a team to be tested and then to grow from those experiences. We’ve been tested in different ways through Concacaf Nations League and now we head into a tournament setting where things will move at a rapid pace. It’s going to be great to see the team come together in this moment.”

Every match will matter as Canada continues to build momentum along their journey to the 2022 FIFA World Cup Qatar™. The 2019 Concacaf Gold Cup will provide Canada’s young players with an important test before Concacaf Nations League Group A begins in the Fall and then FIFA World Cup Qualifiers start thereafter.

Unlike two years ago, national teams will not be able to switch their squad after the group stage. In all, the competition runs 23 days from 15 June to 7 July, with the Ffinal to be played at Soldier Stadium in Chicago, IL on 7 July. Ahead of the Concacaf Gold Cup, Canada will hold a training camp that opens in early June.

Canada will look to improve on their last performance at the 2017 Concacaf Gold Cup after they went unbeaten in the group stage for the first time since 2009. Two years ago, they won 4:2 over French Guiana before drawing 1:1 with Costa Rica and 0:0 with Honduras.

Davies was a standout at the last Concacaf Gold Cup, named to the tournament all-star team and winner of the Top Scorer and Best Young Player awards. Still only 18 years old, Davies just completed his first season in the German Bundesliga.

For the second competition in a row, Canada features a team with an average age younger than 26 (average 25.53 years across 23 players). Along with the group of 23 players selected for the Concacaf Gold Cup, Canada's pre-tournament camp in California will feature Adam Straith of VfL Sportfreunde Lotte as a 24th player.

CANADA AT THE CONCACAF GOLD CUP
The Concacaf Gold Cup is the official national team championship of the confederation. Drawing large crowds and millions of television viewers from across the region, the Concacaf Gold Cup is a celebration of soccer, sportsmanship, and culture. For the first time, the 2019 Concacaf Gold will feature 16 participating nations, three host countries, and 17 venues.

Beyond the group phase, the top-two nations in each group will advance to the competition’s Quarter-finals to be played in Houston and Philadelphia. The Concacaf Gold Cup continues with the Semi-finals on 2 July in Glendale and 3 July in Nashville followed by the Final on 7 July in Chicago.

“Following a strong showing in Concacaf Nations League Qualifying, we need these tougher tests now,” said Herdman. “The Concacaf Gold Cup will be important for our preparations for FIFA World Cup Qualifiers. We have a talented group, but now they will be fully tested in a tournament setting. The team are motivated to do well for Canada.”