14 of the 23 players selected for Canada's Women's World Cup squad hail from Ontario. The roster includes Jayde Riviere, one of the youngest players on the squad and the first player from OPDL to be named to a senior World Cup squad. Canada's first game is June 10 when they take on Cameroon. 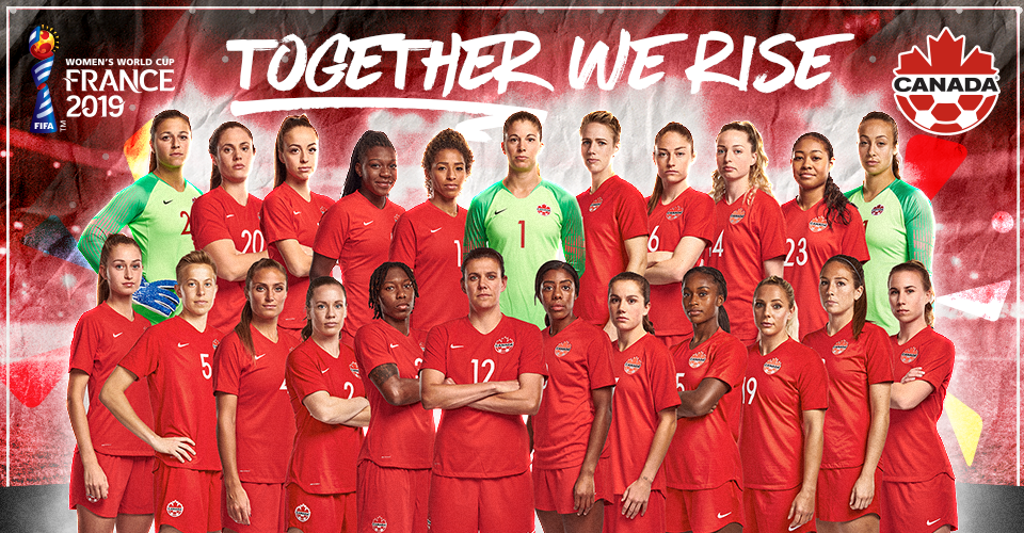 Canada Soccer have announced their official 23-player squad for the FIFA Women’s World Cup France 2019™. Unveiled with the theme “Together We Rise”, Canada’s official squad will compete in their seventh consecutive FIFA Women’s World Cup™ building on the program’s existing foundation and peaking towards the best possible performances on the world’s biggest stage.

Canada are just four years removed from a Quarter-finals finish at the record-breaking FIFA Women’s World Cup Canada 2015™, played from coast to coast across Canada. That competition provided unprecedented exposure for women’s football in Canada and around the world, attracting a worldwide television audience of more than 750 million viewers. Once again in 2019, fans will be able to watch every match live in Canada on CTV and TSN.

“We are going there to win it, but we have been very good at taking things one step at a time,” said Kenneth Heiner-Møller, Canada Soccer’s Women's National Team Head Coach and Women’s National EXCEL Director. “We didn’t look beyond the Algarve Cup and we didn’t look beyond matches against England or Spain; we only looked at what was right in front of us. Right now, there are three group matches in front of us and we are focused very clearly on Cameroon, New Zealand and Netherlands.”

Across eight international matches in 2019, Canada are undefeated with five wins and three draws, along with seven goals scored and just one conceded. Canada’s scoring leader is team captain Christine Sinclair who has scored four times in eight matches, leaving her just four goals back of the all-time international record.

CANADA’S 23-PLAYER SQUAD
The Canada squad features nine returning players from the most recent FIFA Women’s World Cup™, a sixth-place finish on home soil in front of a record-setting 1.35 cumulative spectators. Notable returning stars include recent Canadian Players of the Year Kadeisha Buchanan and Christine Sinclair. At Canada 2015, Buchanan was both a tournament all-star selection as well as the Best Young Player award winner.

Of note, Sinclair will be making her fifth appearance at the FIFA Women’s World Cup™ finals, equaling the national record held by Karina LeBlanc. Along with helping Canada finish in fourth place at USA 2003, she has recently captained Canada to back-to-back bronze medal performances at the Olympic Games.

Buchanan is coming off her third UEFA Champions League winning season with Olympique Lyonnais. She has won eight trophies in three seasons with her French club.

Of Canada’s 14 debutants, half of them were still teenagers four years ago when Canada hosted the FIFA Women’s World Cup™ in 2015. Those youngsters are goalkeeper Kailen Sheridan, centre back/midfielder Rebecca Quinn, fullback Jayde Riviere, midfielders Gabrielle Carle and Julia Grosso, and forwards Jordyn Huitema and Deanne Rose. Of those seven, Grosso, Huitema and Riviere are all 18 years old.

CANADA AT THE FIFA WOMEN’S WORLD CUP FRANCE 2019™
Following Canada’s 10 June opener against Cameroon in Montpellier, Canada will face New Zealand on 15 June in Grenoble and Netherlands on 20 June in Reims. Beyond the group phase, two or three nations from Canada’s group will advance to the Round of 16 with those initial knock-out matches to be played from 23-25 June. Beyond the Round of 16, the Quarter-finals are 27-29 June, the Semi-finals are 2-3 July, and the FIFA Women’s World Cup France 2019™ Final is 7 July.

CANADA AT THE FIFA WOMEN’S WORLD CUP
Fans are encouraged to be part of Canada’s journey at the FIFA Women’s World Cup™ from 10 June to 7 July by watching all the action live on TSN and RDS. Fans can also follow the Women’s National Team both on and off the pitch across Canada Soccer’s digital channels including CanadaSoccer.com, Facebook, Twitter, and Instagram.

“Heading into an away FIFA Women’s World Cup, we hope that the echo from our Canadian fans back home will carry us through our month in France,” said Heiner-Møller. “Having that Send-Off Match was exactly what we needed and it will have a resounding effect on our players for a long time.”